In the late 1800s, a once-peaceful remote country village is under attack—but by who or what, no one knows. Villagers spread rumors of a cursed land, supernatural forces, and even demonic creatures, as the disappearances and killings continue. Pathologist John McBride arrives to investigate the danger, only to discover something much deeper and more sinister than he ever could have imagined. 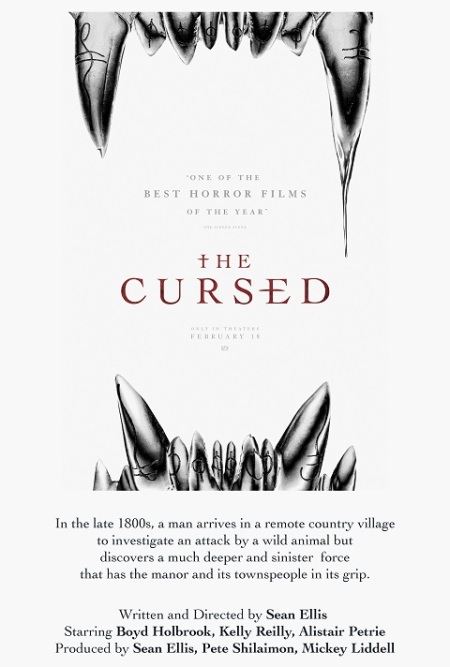 The Cursed is a slow burn yet solid entry in the gothic horror genre. It’s a somewhat new take on werewolf mythology that gets into gypsy curses and more. Boyd Holbrook is good in his role as is the rest of the cast. It’s a bit slow to get going, but overall I enjoyed it.

The biggest positives of the film are its setting and backdrop, the tone and tempo and the use of practical effects over CGI. Gothic horror is hit or miss for me. I didn’t love Crimson Peak, but have enjoyed smaller films like The Lodgers (2018). The setting of 1800s woods and mansion makes for a good backdrop. The creature gets to hide in the woods and kill and the time period allows the cast to fit in with its backdrop. The pathologist uses science of that time period and the weaponry is then too. They are all very religious and don’t take the concept of a werewolf attacking seriously.

Despite being a slow burn I do think the tempo fits. It slowly brings you into the story and doesn’t rush you into non-stop CGI wolves and craziness. Again the time period makes this the right play. You want it slow, you want to see people in the woods falling down so the creature gets them. It’s not today’s typical horror and I like that.

The creature effects are good too. There’s one scene where a creature is being cut open that is pretty fantastic. It looks more like what people in real life would be looking at. I much prefer seeing creatures like this than fake looking CGI so I’m glad they went this way.

The Cursed won’t be for everyone and I know people who won’t like it. Sure it’s slow, but it’s something I liked and I can see myself watching it again at some point. Holbrook is good as are the kid actors. I do wish they gave Kelly Reilly more to do because I love her in Yellowstone. If you want something that isn’t a comic book movie or super blockbuster give it a try.