American Underdog tells the inspirational true story of Kurt Warner (Zachary Levi), who went from a stockboy at a grocery store to a two-time NFL MVP, Super Bowl champion, and Hall of Fame quarterback. The film centers on Warner’s unique story and years of challenges and setbacks that could have derailed his aspirations to become an NFL player – but just when his dreams seemed all but out of reach, it is only with the support of his wife, Brenda (Anna Paquin) and the encouragement of his family, coaches, and teammates that Warner perseveres and finds the strength to show the world the champion that he already is. American Underdog is an uplifting story that demonstrates that anything is possible when you have faith, family and determination. 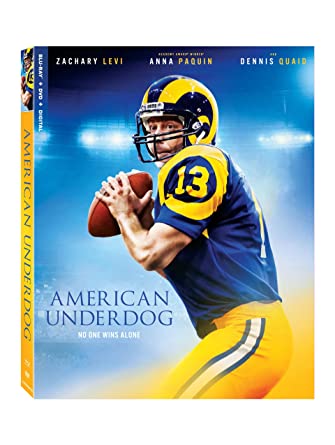 I’m a born and raised New England Patriots fan so I’m familiar with Kurt Warner. His rise in fame in the NFL was a couple of years before the rise of the Patriots dynasty and that dynasty started with them defeating Kurt Warner and the St. Louis Rams in the Super Bowl. If you think you need to know any of that to enjoy American Underdog you are incorrect. You don’t need to know anything about football or Kurt Warner to be inspired by the film. Most of the film doesn’t even involve his NFL playing days it’s about his drive and determination and his love for his wife and family.

If you do know anything about Kurt Warner you know it took him years to make it to the NFL. He barely got a chance to play college football, went undrafted, stocked shelves at a local grocery store and played in the Arena League before finally making it to the NFL. The film tackles (pun intended) those difficulties plus more. Anna Paquin plays his wife Brenda who was divorced with two children before meeting Kurt. Kurt was in college and eventually Brenda caved to his charm. Her oldest son is blind from a childhood accident and none of that mattered to Kurt. That’s what comes across the most in the film, not only was he a determined man, he was a good man. He fell in love with Brenda and her past and her kids weren’t an obstacle for him. Other men would have run for the hills from all that baggage, but he jumped right in.

If you know nothing about football it’s this dynamic between Kurt and Brenda that will inspire you. To say they go through some rough patches is an understatement. She suffers a major loss, they struggle to pay bills or even put gas in the car. Kurt Warner is in the NFL Hall-of-Fame, but there is a reason it’s an underdog story, he struggled mightily to get what he wanted. His family and friends and his faith drove him to never give up and we need more of that especially in today’s world.

American Underdog is a feel good story. By the end you will be rooting for Kurt even if you already know how it ends. It is less about football and more about determination and achieving your goals. Seeing someone being good, honest and driven is something we don’t always get in films nowadays. Sports movies make for great underdog stories and Kurt’s certainly is one of the best.