This week sees a bunch of smaller films with one of the biggest theatrical films of 2019. That movie is the “live-action” Disney remake of The Lion King. I put that in quotes because it’s not actually live-action. They couldn’t train actual lions to sing and dance, but used newer technology to create a more life like looking animal instead of hand drawn animation. I missed it at theaters and anyone I know who had seen it didn’t love it. They thought it was ok, but definitely thought the original was the superior film. I decided to give it a shot on home video and I feel pretty much the same way. Sure this movie looks more realistic, but it lacks the heart and spirit of the animated film. It’s not bad and a younger generation will love it, but those who grew up on the animated film definitely will find this unnecessary. We also know what to expect and what will happen having seen the original. But the film does look and sound amazing on Blu-ray. I really was surprised at how it looked. It’s CG, not hand drawn animation, but it looks surprisingly life-like and although all the songs from the original aren’t there, there are still a number of routines in it that kids will enjoy. It comes with a slew of bonus features too like most Disney releases. I’m not a Disney diehard in the first place so this feels like a cash grab to me and with movies like the live-action Mulan coming, Disney will keep making these until they stop making money. This made over $1.6 BILLION worldwide so yeah these will keep coming out. 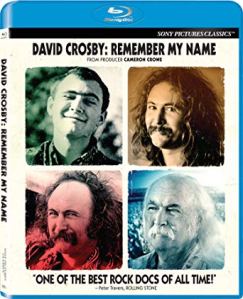 Next is David Crosby: Remember My Name a documentary on musician David Crosby. Produced by Cameron Crowe, the film is a pretty authentic and raw look at the life of Crosby, his highs and lows (because he was high), his music, his life and everything in between. It feels pretty genuine and Crosby isn’t shy about things. He talks about not liking Jim Morrison, feeling guilty for out living friends and musicians like Janis, Mama Cass, Hendrix, his time in jail and how it helped him get clean, his loves and family and his music. From The Byrds to Crosby, Stills & Nash, CSNY and his solo music, he’s made music for decades. He’s also pissed off a lot of people along the way after diving head first into drugs. Neil Young doesn’t talk to him. One of his kids doesn’t talk to him. Stills and Nash won’t play with him again. He’s not shy about his health and what the long term effects of his heroin and coke habit are doing to him. He comes across as a man with regrets, but also at times very pig headed. Even if you aren’t familiar with his music, if you like rock docs, you should enjoy this.

Third we have Legend Of The Demon Cat. If you read me enough you know I quite enjoy Asian crime dramas and Asian action/martial arts films. One genre I don’t love is Asian fantasy films. I don’t come from an Asian background so I didn’t grow up on these stories or this style of storytelling. A duo of an eccentric poet and dutiful monk must solve the case of a demon cat lurking around causing deaths. As they unravel the mystery, it goes back decades to a curse and a staged death. If they can figure it all out, those involved can be saved. That’s what I got out of it at least. Maybe I’m missing something, but that seems like the gist of it to me. It has some cool visuals and actions scenes, but overall I’m not sure if it was kind of movie. I know people who will enjoy it, but these types of films are good for just one watch to me. Production value is top-notch though with great costuming and set design to go with the cool visuals. If you like films like this, you should like this one.

Next is Harmonia, a love triangle involving the conductor of the Jerusalem Philharmonic Orchestra, his wife a harpist and a French horn player. The husband and wife struggle to have a baby after losing multiple pregnancies. The French horn player mothers them a son until years later the couple have a child of their own which causes tension with the older son who learns of his true mother. The 3 leads are all good and the horn player is stunning. I actually really enjoyed the end scene with the brothers and thought it was a good way to end the film showing how the wants of the parents push their children into directions they don’t want yet brotherhood can bond them. I don’t know if it’s something I’d watch again, but it was good for the one time watch.

Sticking in Israel, next is An Israeli Love Story which is based on the true story of the love affair between theater director Pnina Gary and Eli Ben-Zvi, the son of Israel’s second president Yitzhak Ben-Zvi. Margalit wants to be an actress and while on a bus with a girl friend on their way to see a play, she meets two soldiers Eli and his friend. She falls for Eli and moves onto his kibbutz and plan to get married. He fights in the Palmach, Israel’s pre-state underground army. I won’t spoil what happens if you aren’t familiar with the story (I wasn’t), but it shows the early days of turmoil between the new Israel land and those around it who still fight with each other today. Knowing nothing about this story it was easy to hold my attention and wonder where it was going. I sort of guessed what would happen at the end, but even being able to see what was coming didn’t ruin it. The lead actress is fantastic in the role and it really shows the struggles early Israelis had living there and taking in European Jews after World War II. People wanted to be neighborly at first, but once land started being taken and the religious backgrounds of those involved really pushed the hardship and violence.

Sisters of the Wilderness is a documentary about five young Zulu women from underprivileged backgrounds going into the wilderness for the very first time. They are led by Lihle Mbokazi, the first black South African woman wilderness guide where they see wild animals, camp, swim and live life in nature. The backdrop is beautiful, but I’m not exactly sure what I was supposed to take away from it. It’s not bad and it’s well made, but I watch a lot of nature and survival shows so I guess I felt like I’ve seen similar things to this before.

Last we have Bakugan: Origin of Species, a Cartoon Network animated series. I was not familiar with this and it’s geared towards younger viewers more than other Cartoon Network shows. There’s nothing wrong with that and I’m sure there are adults who love it because they love younger shows (Steven Universe fans I’m looking at you), but it’s nothing I’m into. It features 13, 22-minute episodes and reminded me a lot of Digimon. I was too old when that came out, but my nephews were big fans so there is always an audience for shows like this. It’s your standard show about a boy and his friends and weird creatures having all kinds of adventures. This is the first volume to hit DVD from the Bakugan Battle Planet global series so I expect more future volumes. If you or your kids are fans then pick this up.