First there was House of 1000 Corpses. Then there was The Devil’s Rejects. Now, from writer-director Rob Zombie, comes the next blood-soaked chapter in the most violent crime saga in movie history — 3 From Hell. After barely surviving a furious shootout with the police, Baby Firefly (Sheri Moon Zombie), Otis Driftwood (Bill Moseley), and Captain Spaulding (Sid Haig) are behind bars. But pure evil cannot be contained, and a firestorm of murder, madness, and mayhem will be released in this terror ride to Hell… and back. 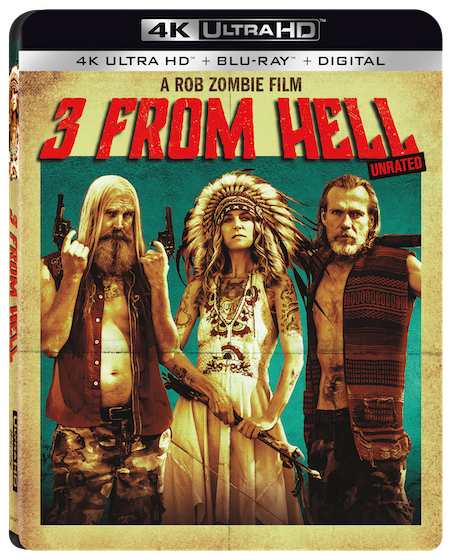 3 From Hell is a little bit disappointing. It’s not bad or anything, but it’s been well over a decade since House of 1000 Corpses and The Devil’s Rejects and I don’t know if this was worth the wait. I hadn’t seen the previous films in a long time and had to get a reminder prior to seeing this, but I remembered the first two films being really violent and crazy. The first hour of this is slow and although the ending is pretty cool, I’m not sure if the build up to it worked for me.

The first hour or so basically shows how they get out of prison. I’m going to watch my pronouns here because I don’t want to spoil who survives and who doesn’t. It focuses way too much time on the prison warden and I kept waiting for more to happen. There is a great cameo from Clint Howard during this part and that was really funny. But ultimately the first hour takes place in the prison and at the warden’s house while the audience waits for the film to go off the rails.

The second half does get better when the characters head down to Mexico. It’s also a bit slow, but at least there’s a better payoff. This is more of what I wanted and less sitting around in a house. The little person is great. There’s partying, nudity and violence, all what I expect from a Rob Zombie film. Then there’s the ending which is pretty gosh darn violent and is a decent closing of the storyline (or not).

I wanted more from 3 From Hell partially because we waited so long for it. It is very much Zombie’s style with a gritty, grindhouse look to it, realistic violence, music, swearing and nudity. I can appreciate all that, but compared to the first two films in the series, this is a bit of a let down.

RIP Sid Haig, you will be missed.