Shaft is the next chapter in the film franchise featuring the coolest private eye on any New York City block. JJ, aka John Shaft Jr. (Usher), may be a cyber security expert with a degree from MIT, but to uncover the truth behind his best friend’s untimely death, he needs an education only his dad can provide. Absent throughout JJ’s youth, the legendary locked-and-loaded John Shaft (Jackson) agrees to help his progeny navigate Harlem’s heroin-infested underbelly. And while JJ’s own FBI analyst’s badge may clash with his dad’s trademark leather duster, there’s no denying family. Besides, Shaft’s got an agenda of his own, and a score to settle that’s professional and personal. 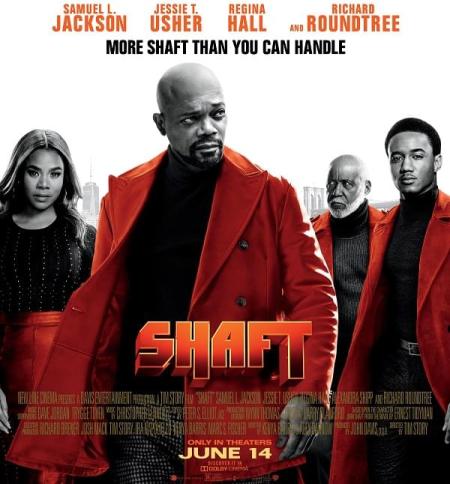 Shaft is a pleasant surprise and a ton of fun. I wasn’t sure what to expect going into the film, I liked the trailer for it, but I couldn’t tell what to expect in terms of tone/genre. There is a bunch of action in the flick, but to me it’s more a comedy and I appreciate the filmmakers going in that direction with the film. Keeping the movie light and the action over-the-top makes for a good time at the theater.

Let me clarify that, if you use terms like misogyny, toxic masculinity and the like, THIS MOVIE IS NOT FOR YOU. STAY HOME. If you have a sense of humor and can take movies for what they are, you’ll have a good time at the theater. There is violence and nudity and swearing and everything I grew up on with 70’s and 80’s action comedies and exploitation films. I had a lot of fun with it and I guarantee I missed jokes/dialogue because the crowd reaction was so loud you couldn’t hear everything.

This film is a sequel to the 2000 version of Shaft with Samuel L. Jackson returning as John Shaft. This adds his son J.J and also clarifies some family history that the 2000 version had. You’ll hear the line and understand what I mean. If you haven’t seen any of the previous films (the 2000 one or the 1970’s Richard Roundtree ones) that’s fine, you should still be able to enjoy this without knowing much about those.

This is the movie I expected from The Hitman’s Bodyguard. I thought that movie was ok, but thought it would be a lot more comical with Sam Jackson and Ryan Reynolds both being funny guys. Jackson gets to shine in Shaft poking fun at Junior (played by Jessie T. Usher). There are a ton of generational jokes (technology, men being men, not talking about feelings), but they don’t pander with those jokes. Most of the time a joke about an older person not knowing about computers is played as a slap in the face to the older person, but with Shaft, he gets to slap back of course. Even though the film is filled with swearing (it is Sam Jackson after all), it’s lighthearted in a way. Shaft has been an absentee father to JJ, but he teaches him a lot while working together. He knows he’s done his son wrong and wants to make amends now because of it.

I genuinely had a good time with Shaft. It is way funnier than I thought it would be and it has a stellar soundtrack (a staple of the franchise). I know a lot of fans were disappointed in the 2000 film, but I hope they support this one. The crowd had an absolute blast with it and I would definitely watch it again.