Synopsis:
When Troy Holloway wakes up to find himself trapped aboard a drifting escape pod shooting towards the Sun he quickly realizes the true terror of his situation. With rapid oxygen depletion and a burn-up rate of 90 minutes, Commander Roberts leads a rescue party to save Holloway before time runs out. Having recently lost his son and now confronted by his immediate end, Holloway feels less enthusiastic about survival. But Roberts, speaking to him only through a weak radio transmission, is determined to save his life, and both soon learn that the lives they have both lived influence each other in unexpected ways. 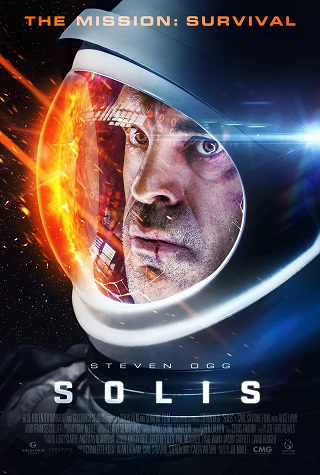 Solis stars Steven Ogg (The Walking Dead) as an asteroid mining engineer trapped inside an escape pod on its way to the sun. All others are dead and he can only communicate with one woman over communications who’s trying her best to get him rescued.

Ogg is a solid actor and he’s good in this. It’s a mix of Gravity, Sunshine and Locke. He’s alone in space like Gravity. He’s on his way to the sun like Sunshine. And he’s able to communicate to someone outside his vehicle like Locke. It’s nothing groundbreaking or new, but Ogg is easy to watch and you sit trying to figure out if he’ll survive or not.

If you like single location/single actor movies you should like this. It tries its best to have intensity and overall it does keep you guessing. Things backfire. Rescue is further away than thought. He gets closer and closer to the sun. He has to go outside to finagle his own fix. Ogg is good and you expect a certain ending because of the genre, but it does go in different directions.

If you like Steven Ogg give Solis a try. It’s not a bad sci-fi flick but I don’t think you need to see it more than once.