Campbell reprises his role as Ash, the stock boy, aging lothario and chainsaw-handed monster hunter who has spent the last 30 years avoiding responsibility, maturity and the terrors of the Evil Dead. When a Deadite plague threatens to destroy all of mankind, Ash is finally forced to face his demons – personal and literal. Destiny, it turns out, has no plans to release the unlikely hero from its “Evil” grip. 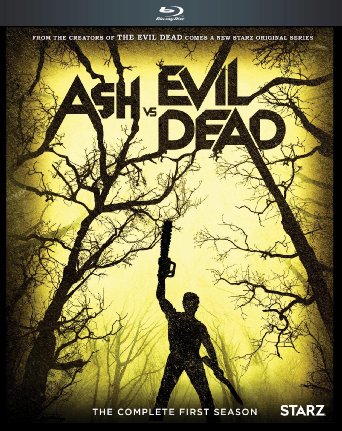 I was a little hesitant when they announced an Evil Dead television series. I’ve been a fan of the Evil Dead/Army of Darkness franchise for years and I’m a huge fan of Bruce Campbell. I was majorly disappointed in the Evil Dead remake so I wasn’t sure what to expect from the TV show.

After watching Ash vs Evil Dead Season 1, I gotta say, it’s really freaking good. Any reservations I had were gone quickly. The first episode is directed by Sam Raimi himself and it has all his tricks and trademarks (especially the ones that made the movies stand out). The tracking shots through the woods, the odd angles with turns, everything you remember from the movies, Raimi put into episode one.

The other directors followed suit making sure every episode had the same look and vibe. The show also has a good combination of practical effects and CG. I really like that. I’m not a huge fan of CGI, but used properly and mixed in with practical effects, make-up and models, it can work and look good. There’s lots of blood, make-up effects, heads coming off, everything I want in a horror/slasher show. The combination works because the CG doesn’t dominate unlike most shows/movies today.

I also like that after the pilot, it turns into more of a road trip show. Ash along with two friends, Pablo and Kelly, hit the road to get the book read and for Kelly to save her dad. It almost has a Supernatural vibe to it because of the combination of comedy and supernatural elements.

I like that it does mix comedy and horror. When done right, you get great things like Army of Darkness or Tucker & Dale vs Evil. When done wrong, you get unwatchable, usually straight to video junk. The diner scene is just fantastic. You get horror elements and action, but it adds in stuff like a hockey skate going through someone’s head. It’s comedic relief in the middle of horror action.

But the show does live or die because of Bruce Campbell. Campbell is fantastic as Ash yet again. He’s still a womanizer, but has matured in his own way. He’s still funny and quick to shoot, but he knows he’s aged. There’s a completely hilarious scene with a cloned Ash fighting Ash and they talk about trick knees and bad backs, etc. Campbell’s playing Ash at a good age. Even his new friends Pablo and Kelly get a nice joke about hair dye.

I really liked Ash vs Evil Dead Season 1 and if you like the movies, you will too. It has that campy feel to it you want. It uses a bit more CG than what they had 30+ years ago, but the blood, gore and effects are still there. It’s not a reboot or remake or even a re-imagining. It’s a continued storyline from the movies and I like that a lot. Bring on Season 2!