Marvel Studios’ “Shang-Chi and The Legend of The Ten Rings” stars Simu Liu as Shang-Chi, who must confront the past he thought he left behind when he is drawn into the web of the mysterious Ten Rings organization. The film also stars Tony Leung as Wenwu, Awkwafina as Shang-Chi’s friend Katy and Michelle Yeoh as Jiang Nan, as well as Fala Chen, Meng’er Zhang, Florian Munteanu and Ronny Chieng. “Shang-Chi and The Legend of The Ten Rings” is directed by Destin Daniel Cretton and produced by Kevin Feige and Jonathan Schwartz, with Louis D’Esposito, Victoria Alonso and Charles Newirth serving as executive producers. David Callaham & Destin Daniel Cretton & Andrew Lanham wrote the screenplay for the film, which opens in theaters on September 3, 2021. 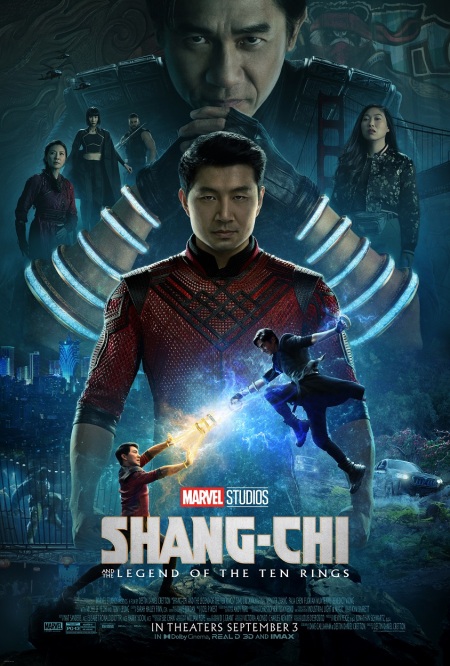 Reviews and Twitter reactions I’ve personally seen for Shang-Chi and the Legend of the Ten Rings have been pretty mixed and I understand why that might be the case. It’s the least Marvel looking film to date. By that I mean a few things. When you see a Marvel film nowadays you expect characters you are familiar with, the typical big fight sequences, use of CGI and interconnected storylines to previous and future films. This is an origin film of a character that the average movie goer isn’t familiar with. Shang-Chi isn’t Captain America. He’s not The Hulk. Even diehard comic fans won’t be overly familiar with the film version because it sort of retcons his story to a more modern timeline and skips over some things that might be problematic in today’s world. People seeing the movie won’t know what to expect going into it and I get that.

As for me, well I really dug it. It’s probably my favorite Marvel film since the first Guardians of the Galaxy. I watch a ton of Asian films for the site and grew up watching Asian films and TV shows. The film opens with a flashback to explain The Ten Rings and the man who controls them. Then it goes the normal Marvel way, set in San Francisco after the events of Avengers: Endgame. We are introduced to our lead, played by Simu Liu, who’s a parking valet and he goes by the name Shaun. His best friend is Awkwafina and they go out for dinner and drinks with friends, sing karaoke, all the normal stuff you expect in a MCU film’s first act. But then Shaun’s past catches up with him and there’s a pretty solid fight sequence on a bus. Awkwafina’s Katy realizes there’s more to her friend and he tells her the truth about who he is and his real name.

Who Shang-Chi is is the son of the leader of The Ten Rings organization. He was raised to be an assassin, but after the death of his mother and realizing what his father expected from him, he leaves his sister behind and moves to America for a normal life. That normal life is pushed to the side as he thinks his sister is in danger and with Katy flies across the world to help.

When his father gets involved the film turns into an Asian fantasy/action film which I’m more than ok with. It dives into mythology and folklore and has all kinds of martial arts training sequences. I’ve seen franchises like The Monkey King and Along with the Gods so I’m more used to this storytelling than others might be. There are dragons and odd creatures and superpowers and martial arts, all stuff I enjoy. By film’s end you think you’re watching something out of Asia, not Disney/Marvel. Marvel films use a ton of CGI as does this, but this feels different. It’s more part of the folklore and storytelling than it is to do a giant battle scene with your favorite heroes and aliens. Don’t get me wrong, the final battle involves a giant CGI dragon, crazy creatures and over-the-top computer generated action, but there is plenty of hand-to-hand action you expect with actors like Tony Leung and Michelle Yeoh.

I’m curious to see how Shang-Chi and the Legend of the Ten Rings does at the box office. Most MCU films do well because you have to see them to see the next one and then the next one and so on. There is a mid-credits and post-credits scene that ties in the universe and sets up a sequel, but there isn’t a whole lot of connection to the MCU world. Two characters from other films make an appearance, but the biggest connection to the MCU is that it rights one of the biggest wrongs. I can’t say what it is because I’m not sure how well known that this one character is in it, but you’ll laugh the entire time he’s in the film. Like Black Widow a few months ago, it almost feels like a standalone film with just enough to tie into future storylines. I can see the average movie goer expecting The Avengers being disappointed in it, but for me it’s…