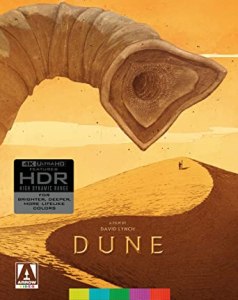 Up first this week is a newly restored 4K version of David Lynch’s Dune. With the new remake/reboot/adaptation coming out later in the year, it’s a good time to revisit this 1984 film. When it was released it was a box office bomb and was critically crushed, but over the decades it’s grown a wildly popular cult following. The studio was hoping this adaptation of Frank Herbert’s novel would be the next Star Wars, but with Lynch directing, they got a much different film. Sure there are diehards now and people will defend the film to death, but back then, it skewed Lynch away from ever doing a big studio film. It was the film debut for Kyle MacLachlan and it also had a big supporting cast of Patrick Stewart, Brad Dourif, Dean Stockwell, Virginia Madsen, José Ferrer, Sting, Linda Hunt, and Max von Sydow, among others. As for me, well I don’t love it as much as others, but it’s definitely grown on me. As a kid I was bored with it despite having giant sandworms and some cool (for the time) visuals, but it’s very long. It is after all a Lynch film. It’s a film I can sit through now knowing what to expect. It’s not great to me, but I understand the cult status. This restored film is pretty stunning and is jam packed with bonus features including multiple commentaries, featurettes and plenty more. As of right now this is the definitive release for the film so if you are a fan you’ll absolutely love this. 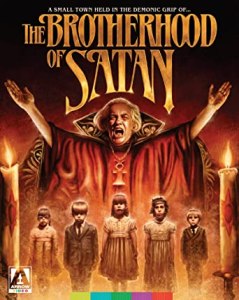 Second we have The Brotherhood Of Satan. This 1971 film feels like a precursor to The Children of the Corn. I wasn’t familiar with it at all. It’s about a dad, his girlfriend and his daughter driving to the daughter’s grandmother’s house when they get stuck in this middle of nowhere small town. No one seems to be able to leave this town and kids are disappearing. A priest realizes something is happening, but it seems too late. People are being killed and kids play a vital role in all of it. There is a coven that kill themselves to take over the children. It’s a hot mess, but it probably influenced a lot of later horror films. It most likely has a cult following as well and this new release comes with commentary, interviews and more.

Third we have Fear the Walking Dead Season 6. I tried watching the series when it first aired and gave up towards the middle of the second season. None of the characters really intrigued me and it just didn’t work for me. I got later seasons to review and it has grown on me. I don’t watch it when it airs, but I don’t mind catching up when DVDs or Blu-rays come my way. Season 6 begins with Morgan being left for dead after being shot. His group has been disbanded and he’s trying to get back to them as new people try to take charge. The season uses flash-forwards and time jumps to bring the series a bit closer to The Walking Dead timeline where we first met Morgan. There is also a submarine and nuclear bombs in this season. It’s all a bit preposterous but it’s at least more entertaining than the first few seasons.

Next we have Murdoch Mysteries Season 14. This is just a delightful show that captures an era brilliantly with great characters, costuming and set design. I’ve enjoyed watching this show over the years when it comes my way. If you aren’t familiar with it, it is set in Toronto around the turn of the 20th century. It centers on William Murdoch (Yannick Bisson), a detective at Station House Four, who solves crimes using scientific techniques and inventions which are highly advanced for the time. Season 14 opens with 2 episodes directed by Bisson. The first sees a murder of a Vaudeville talent and Murdoch believes the real target was Charlie Chaplin. Episode two sees Inspector Brackenreid’s son wanted for murder, but he doesn’t let Murdoch investigate. Other episodes include a college student electrocuted, Murdoch solving a murder while on vacation, Murdoch and Watts are brought in to solve a murder in an area declared a sovereign country. It’s a fun little show that is equal parts House and Sherlock. If you are a fan, pick up season 14.

NCIS: New Orleans: The Final Season is out this week as well. This is a show my mom watches on TV when it airs. It’s not her favorite of the franchise, but she enjoyed it enough to watch all the seasons. The season opens a few weeks after Mardi Gras and deals with the Covid pandemic. Other episodes include the murder of a fellow New Orleans police officer, a mysterious torpedo from a submarine, a marine psychologist is found dead, a Molotov cocktail is thrown at Pride’s bar bringing back Callie Thorne and more terrorist attacks by her character as Pride and Rita plan their wedding. It’s the last season of the show so if you are fan, you’ll enjoy it.

The next few releases came out in August, but I didn’t get my copies until recently. First is NCIS Los Angeles The Twelfth Season. This is another show my mom watches consistently on TV. She prefers the original NCIS with Mark Harmon, but does rank this series number 2 in the franchise. Season 12 opens with a Russian bomber missing in the US and Callen and Sam must find it and get its information before the Russians can blow it up for good. Other episodes include a navy reservist’s body is found by thieves in the middle of a robbery, the team must track down an organized crime leader who is trying to buy stolen defense technology, Sam’s daughter is abducted, Anna is kidnapped and has to be rescued before she’s sent back to Russia and Deeks is kidnapped. I don’t mind the show when I have to review it, but my mom is definitely the bigger fan.

Last we have NCIS: The Eighteenth Season. Now this is still my mom’s favorite after 18 seasons. She watches reruns most days. Season 18 has episodes involving the discovery of a dead body in the basement of NCIS headquarters, a murder investigation is linked to a years-long treasure hunt, Palmer’s wife dies from COVID-19, a Navy Officer is found dead in a freezer truck, a petty officer is killed in a hit-and-run, Bishop is implicated in an old NSA leak but it’s cover for an undercover mission. I’m not a huge fan of the show, but it continually gets ratings and people like my mom watch it every year.