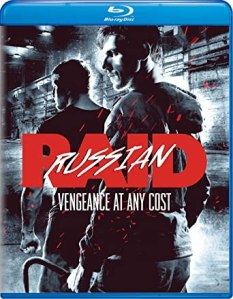 Not a whole lot for us this week. I have a feeling a delivery or two might be late. Up first is Russian Raid. Inspired by Gareth Evans’ 2011 martial-arts hit The Raid: Redemption, first-time director Denis Kryuchkov brought together some of the best MMA talent in Russia to make this action flick. Now The Raid: Redemption is one of my favorite films and it might be the greatest action flick ever made so I was curious to see what Russia would make. Overall Russian Raid isn’t bad, but it’s definitely saved by its third act. It’s only 103 minutes long, but the second act feels really long and out of place. The Raid: Redemption gives you a little story to start then bam, chaos for an hour. This opens with a sniper missing a shot because he wanted to take a shot at someone who they explain later on. He goes into hiding then gets involved in a warehouse raid. He’s joined by a bunch of MMA punks who he clearly doesn’t like, but he’s there for a reason. They raid the warehouse, tie up people and want to get some signatures to legally take the warehouse. But then it outsmarts itself a bit with some plot twists that are so unnecessary. One of the men in the warehouse is from the lead’s past and the lead is doing the raid to draw out someone else from his past. By the film’s end, the whole group of MMA punks seemed unnecessary. The film is about the lead wanting revenge and when that revenge is let out in the third act, it’s a much better movie. The third act is more of the balls-to-the-walls action I was hoping the entire movie was. The lead, Ivan Kotik, impressed me though. I’d love to see him in a John Wick film opposite Keanu Reeves. Unfortunately I compare all action movies made after The Raid: Redemption to The Raid: Redemption especially one inspired by it and this isn’t as good. It’s not bad, but there’s a bit too much story for a film that should be total action with all the fight talent involved. The lead is good and the action in it is good, but trim out 15 minutes of story and it’s a much better movie.

When you think mobster stories you probably don’t think of Canada, but Mafia Inc is here to change that. Based on true events and adapted from a best selling book, it’s about the Sicilian mob in Montreal. It opens with a brutal slaying to import drugs and plays out like a typical gangster flick. There’s a dirty cop and other gangs/bad guys all wanting a piece of the pie. There’s a member causing too much violence which is bringing heat to himself. The son of the don tries to take him out for bringing that heat. Of course there’s a woman in the mix and the authorities trying to take them all down. It taking place in Canada makes it pretty original and you won’t see anyone from The Sopranos or Marty Scorsese flicks in it either. The story itself we’ve seen before especially if you are like me and watch a lot of mobster movies. But I definitely hadn’t seen a Canadian mafia movie before so I recommend it for that.

Third we have Yalda, A Night For Forgiveness. This is pretty crazy. A young woman was charged with killing her much older and richer husband. She is in prison for it and goes on a TV show to win forgiveness from the man’s daughter. The film primarily takes place on the set of Iranian reality show and I really hope this isn’t a true story. Viewers text in whether they forgive a person and money is given to the families of the victims. If both the viewers and family forgive, the sentencing is lighter. Again, I hope this doesn’t happen in Iran. The lead actress is good and the setting makes it all feel claustrophobic and out of the hands of the woman trying to get forgiveness. Of course more truths come out including a child and people lying. It’s a hard watch because you feel for the lead despite knowing a man died because of her, but the acting is good and it holds your attention throughout. 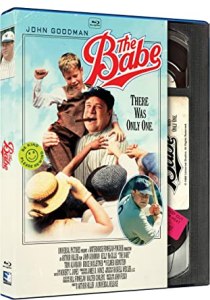 The next batch of releases all come from Mill Creek Entertainment with all, but one part of their totally fun Retro VHS Slipcover line. If you aren’t familiar with this line, they take Blu-rays and add slipcovers that look like 1980s/1990s VHS tapes like what you would have seen at the video store. As a kid who grew up going to the video store, these are always cool to me. First is The Babe starring John Goodman as Babe Ruth. From 1992, the movie came out while Goodman was widely known as Dan Conner on Roseanne. Goodman is great in the role which isn’t afraid to showcase some of Ruth’s not-so-great antics. He was one of baseball’s biggest stars but also liked to play off the field as much as he did on the field. It’s not considered one of the greatest baseball movies ever made, but I’ve always had a soft spot for it because of Goodman’s performance. It also takes some liberties with the real timeline, players who played with him later in his career not early on and really pushes the called home run which people have been debating over for decades, but if you are a Goodman fan like me, it’s a good flick. 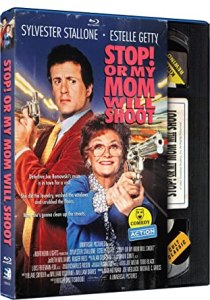 Stop! Or My Mom Will Shoot stars Sylvester Stallone as a detective and Estelle Getty as his mom. Stallone considers this the worst film he’s ever done. It’s not good, but if you watch it for the camp factor, it can be somewhat fun. It’s the classic storyline of a meddling parent upending their adult child’s life getting involved with his love life, his work and everything in between. Of course she eventually gets involved with a case. I hadn’t seen it in years and it’s still not very good, but look at the sweet Estelle Getty on that cool retro slipcover!

The polar opposite of that movie would be the Oscar nominated Gorillas in the Mist which is also getting the Retro VHS treatment. Sigourney Weaver was nominated for a Best Actress Academy Award for her performance of Dian Fossey. I hadn’t seen the film in 25-30 years and it’s arguably still Weaver’s best performance. The film still holds up pretty well and mixes real animals with practical effects. Today’s world they would all be CGI, but because this was the 1980s you still got people in gorilla suits and not computer generated. It’s not a film I’d bust out and rewatch all the time, but Weaver’s performance is worth seeing.

Last for the Retro VHS slipcovers is Gold Diggers: The Secret of Bear Mountain. From 1995 it stars Christina Ricci and Anna Chlumsky and I had never even heard of it. It seems to be one of the early films for both stars they sort of don’t talk about. I read one quote that said Ricci wishes she hadn’t done it. It’s a pretty cliched film about a city girl moving to a rural area, befriending the tomboy girl who doesn’t have any friends who dreams of finding the lost gold of woman named Molly Morgan. You can tell both actresses were going to do better work later on in life and although it’s not a movie geared towards me, I’m sure it has a cult following among its target audience. I was surprised to see Jewel Staite pop up in it too! If you are a fan, you’ll like the slipcover.

Last from Mill Creek is the My Girl/My Girl 2 Double Feature Blu-ray. These are the Anna Chlumsky films I remember from the 1990s. The first film helped put her on the map and also had a big cast including Macaulay Culkin, Dan Aykroyd and Jamie Lee Curtis. It’s one of those films like The Sandlot that takes place in a certain era (the 1970s) but feels timeless. Chlumsky is the classic daughter of a single dad with her friend and dealing with a possible love interest of her dad. The story can take place at any time. If you aren’t familiar with what happens between the friends, I won’t spoil it.

My Girl 2 sees Chlumsky sent to LA to live with her uncle while doing research on her mother. Set two years later, she is taken under the wing of a young boy who must show her around. It’s your classic fish-out-of-water storyline that goes pretty much where you expect it. The first film is a timeless film, the sequel not so much, but it’s worth having together in this one collection.