Not a whole lot for us this week so I’ll start with the best of the bunch, The Last Starfighter. This was a favorite of mine as a kid, but I hadn’t seen it in probably 20 years. This new Blu-ray release features a new restoration from a 4K scan of the original 35mm camera negative so the film looks as good if not better than it did in the 1980s. There is also a slew of new commentaries and much more in the bonus features. As for the film itself, it still holds up pretty well. If you aren’t familiar with it, it is about a teen in a trailer park who can’t wait to get out. He fixes things around the trailer park, has a younger brother and a girlfriend and he’s obsessed with a video game. After setting a new high score on the game, he’s visited by an alien who wants his help to fight the bad guys in space. He hesitantly goes along, but doesnt want to join the fight and heads back to Earth, but when the bad guys get the upper hand and attempt to kill him on Earth, he must stand up and fight back being the Last Starfighter. It’s everything you wanted as a kid, adventure, aliens, escapism, video games leading to a cool life. It’s why it’s still a solid watch almost 40 years later. Although a lot of the special effects don’t hold up. It’s early CGI mixed with practical effects and the practical effects are great, the CGI is highly questionable. When the alien first takes him into space the DeLorean looking craft looks hysterical flying. Same for some other starships. But for a film I liked as a kid and hadn’t seen in 20 years, I still very much enjoyed it. 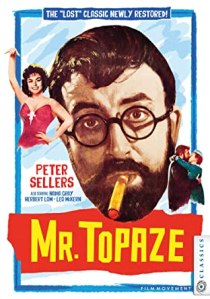 Second we have Mr. Topaze starring Peter Sellers. This is his directorial debut and is hitting Blu-ray/DVD for the first time in North America after being restored from the only surviving print. Sellers stars as a teacher who is fired because he won’t change the grades of a wealthy student. He then gets caught in a scam and is hired to be a manager of a business. A local politician and actress girlfriend take advantage of his honesty and put everything in his name, but Mr. Topaze might have a trick or two up his sleeve. The film also goes by the name I Like Money. I was not familiar with the film at all and I can see Sellers fans eating this release up. The film looks good restored and this release also comes with solid bonus features including a Sellers short and essay book. Sellers is one of those actors I need to watch more of. I’ve seen his bigger films of course, but ones like this are always new to me. I don’t know if it’s considered one of his best, but it’s not bad. It was also cool seeing a somewhat younger Michael Gough who I know as Alfred in the 1990s Batman flicks.

Third we have The President. While watching this, I couldn’t quite tell if it was satire or not. It comes across as satirical, but also plays pretty straight at times. In a non-specified country, the president gets his family on a plane to leave, but his grandson won’t go. He stays with his grandfather, but as they are leaving the airport, revolutionists take over and the dictator and grandson must escape. Stealing clothing, getting a haircut and pretending the boy is a girl, the pair hide out trying to get to freedom. Over the course of the movie, the man learns why his people hate him from stories told by political prisoners and locals who cheer on the coup and want to capture the man for the bounty money. Obviously he knew he dominated his people so them hating him shouldn’t be that surprising. I’m not familiar with anyone involved, but the actor playing the The President was good as was the young boy playing the grandson. At times it plays as comical. The opening sees the grandfather and grandson turning off and on the power to the city. One of his assistants plays as comedic relief as well. But I don’t know if it’s supposed to be satire. Maybe something is lost in translation a bit, I’m not sure. But as it is, it was pretty good for a watch.

Next is Three Comrades. This movie is all over the map. It’s about 3 friends who also work together. In the beginning they are being interviewed about their work, their lives and if they like Russia. They then work, hang out afterwards, have some drinks and decide to meet up with a woman. Then they do something terrible and people come after them. The ending is also kind of blunt and doesn’t really mean much. I’m not really sure what the filmmaker was going for. Until the horrible event it plays as kind of a comedy like Workaholics. Then they do the bad thing and people come after them. Then one guy is shown at the end, makes a hand gesture and it’s over. Maybe it’s a cultural thing I’m missing.

Last we have Bonanza: The Official Eleventh Season Volumes 1 & 2. Like Gunsmoke, Bonanza was a TV staple for years and is a show my parents still watch reruns of today. Westerns once ruled TV and this had some big name actors in it like Lorne Greene and Michael Landon. Season 11 has episodes involving a woman witnessing a stagecoach robbery and murder who may not be telling the truth, Hoss is acting sheriff, Candy helps the family of a man he killed, Hoss is mistaken for a famed bank robber, Candy quits the Ponderosa after inheriting money from an old Indian friend, a new school opens in Virginia City, actress Lotta Crabtree returns and Hoss is accused of killing her co-star, Ben is wounded in Mexico and kills a local gangster whose son wants revenge, and this is the season that has the Easter episode and the season finale is when Joe is kicked by a horse and must decide if his arm gets amputated or not. If you’ve been picking up the previous seasons, add these this week.