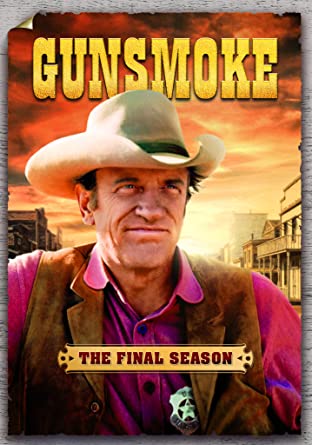 Gunsmoke is a legendary show beloved by viewers who still watch the show today. My parents grew up on it and watch reruns on TV nowadays. It ran for over 600 episodes and it’s easy to understand why, it’s classic television storytelling.

James Arness plays Marshal Matt Dillon, a now iconic TV good guy. He takes care of the law & order of the Old West and you better not cross him. But besides Marshal Dillon the show had a staple of characters like Festus, Doc, Newly and Miss Kitty through the years. It had its fare share of bad guys through 20 years as well.

From Dodge City and beyond, the show’s backdrop served as a character by itself. The Old West makes for a great environment whether it’s a saloon, a bank to be robbed, a train to be robbed, farm land with animals or the dirt roads with shootouts, the environment of the Old West is filled with adventure, excitement and crazy characters.

The Final Season wraps up the show nicely, but let’s be honest, The Complete Series box set is an absolute beast of a collection. It’s close to 10 pounds of DVDs! It has a very cool display box that will look great on your shelf as you (re)watch the series. All 20 seasons and 635 episodes have been digitally remastered and look and sound great. This is one of the most impressive collections I’ve ever had. I can’t tell you how wowed I was when I opened the box and saw this, it’s gosh darn amazing.

With Mother’s Day coming up and Father’s Day next month, Gunsmoke The Final Season & The Complete Series would make great gifts. It’s something my parents would both enjoy especially The Complete Series box set. If you are or know someone who’s a fan of the show or similar shows like Bonanza, both of these are highly recommended.