Provocative and thrilling, this “ultimate A.I thought experiment” (The Atlantic) explores the intersection of man and machine with emotional depth and pulse-pounding tension. A great ensemble cast including Gemma Chan, Katherine Parkinson and Tom Goodman-Hill is enhanced by fantastic guest stars, such as Oscar® winner William Hurt, Carrie-Anne Moss and Letitia Wright. Humans is set in the near future where humanoid “synths” have been created to help busy families simplify their lives. But will these perfect servants stay compliant forever? Originally broadcasted on AMC from 2015-2018, the acclaimed series is based on the award-winning Swedish sci-fi drama Real Humans. Humans also features Will Tudor, Colin Morgan, Ivanno Jeremiah, and Emily Berrington.

In Series 1, when Joe Hawkins (Goodman-Hill) buys synth Anita (Chan), he hopes it will relieve the pressure on his lawyer wife, Laura (Parkinson). Although Anita is a hit with Joe’s young children, Laura feels uneasy about sharing her home with a synth. Meanwhile, retired synth engineer George (Hurt) refuses to dispose of his beloved but malfunctioning synth, Odi (Tudor). And mysterious Leo (Morgan) hides secrets that could transform the future of synth technology. Then in Series 2, synths become an inextricable part of society, obediently serving and protecting the human population. But what happens when these Synths are given the right to consciousness and their own free will? Series 3 is one year after the dawn of consciousness. A decimated and oppressed Synth population fights to survive in a world that hates and fears them. 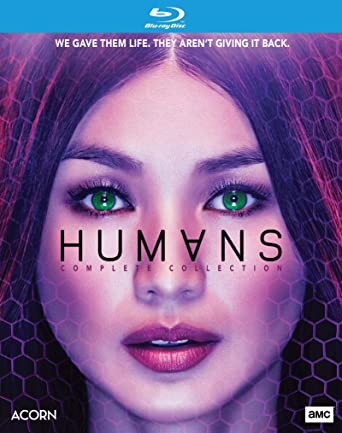 In 5-10 years Humans will make a lot of underrated sci-fi/TV shows you didn’t watch lists. I’ve seen it on some already especially with Westworld (an extremely similar show) getting all the love and acclaim and Humans flying under the radar. It’s probably why you may not be familiar with it, Westworld gets all the headlines. That and the fact that it didn’t air on a network that pushes their big genre shows (not named The Walking Dead) unlike HBO, Showtime or even Starz.

I actually quite liked the show. Even with only 3 seasons, it took its time to build up its world, how Synths first were brought into daily life then how they would eventually evolve and how society would treat them. You can certainly find many allegories in the show as it questions what is life and who gets to judge what a life is.

But unlike other shows/movies that want to push a message on its viewers, the show entertained first and foremost. It didn’t have the huge production value of Westworld, but it still looked great. Costuming, set design, effects are all solid. I don’t have an issue with a project that wants to have a message if it’s entertaining which a lot of creatives forget to do. I never felt preached to or that I was watching someone’s propaganda even though I know it had many messages in it. They made it a sci-fi show first with smart writing, good acting and proper storytelling and that’s how you do it right.

This Humans Complete Collection is a great way to get into the show if you haven’t seen it or a great way to rewatch it in a time we are rewatching a lot of things. It’s a show I can see myself revisiting over the years like Battlestar Galactica, Firefly and the like. The cast and guest stars are great. The writing is sharp and the storytelling resonates. If you are a fan of the show or just like quality science fiction, check it out.