Not a lot of mainstream releases for us this week so I’ll start with the biggest name, The Twilight Zone Season 1. I grew up watching reruns of the original The Twilight Zone on TV. It’s a beloved and iconic show and I was intrigued to see what Jordan Peele could do with this new reboot. I don’t have the CBS app thing to watch it so I popped in the DVDs. The first episode has a classic Twilight Zone concept, a struggling comedian, Kumail Nanjiani, makes a deal with a famous comedian, Tracy Morgan, and he starts killing it on stage and off. His act wasn’t funny and nobody liked his 2A jokes, but once he started talking about personal problems and people he didn’t like, he rose at the comedy club. It’s a classic Zone story, but ultimately not a good episode. The 2nd episode sees Adam Scott on a flight where he finds an old MP3 player that plays a podcast about how his flight goes missing. He tries to convince people they are in trouble, but nobody listens. Great Zone concept, solid episode. The third episode is about a black woman taking her son to college but they get into a time loop with a racist cop. Great Zone concept, terrible episode. You can kinda see where I’m going with it. There are good episodes and really bad ones. A friend nicknamed it The Twiwoke Zone because that’s what it is. Sure some original episodes touched on issues but this new reboot beats you over the head with it. If I wanted sci-fi with political agendas I’d watch Black Mirror. I’m a big Peele fan and the guy knows his genre material well, but this was a big miss for me. I have no interested in watching Season 2 unless it comes my way to review. Really disappointed in this. 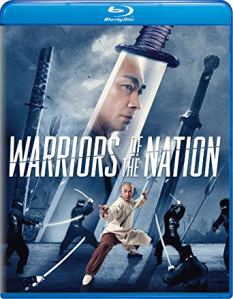 Second we have Warriors of The Nation. This is one of those films that I’m not sure if it’s based on a true story, loosely based on actual events and hyped up more or completely made up because of my lack of Asian history. It’s also one of those movies that I like for the action, costuming and set design and struggle with the plot. The basis of the story is that a top military officer, Zhang Zhidong, is kidnapped by the White Lotus Society. Wong Fei Hung knows he needs to rescue Zhang after overhearing Chinese officials working for the Japanese. There are lots of side characters and Chinese pride and that’s fine, I just like the action. There are some great fights and wire work. The final fight is really good especially the one on one. Even the women get involved and I dug the fight choreography and action. Again, the plot is almost irrelevant to me because we’ve seen similar movies a thousand times before, but with fight actors like Vincent Zhao involved, you know the martial arts and hand to hand combat is going to be top-notch. It’s relatively short too (about an hour and a half) which is a big positive because a lot of these movies tend to go longer than needed.

Third we have Is Anybody Listening? a documentary on how people can help veterans when they are transitioning into normal life. Psychologist Paula Caplan grew up with a father who served in World War II and has become an expert in listening to veterans. She never served herself and wants non-veterans to be there for those who did serve. She set up a non-profit to help veterans tell their stories and help deal with their PTSD and other issues they have. One female soldier talks about a rape incident that happened to her while serving in the 1980’s. Others just talk about civilians not understanding them when coming home. I’m a non-veteran, but believe in veteran causes and support veterans companies so I found this pretty interesting. It’s not ground breaking work if you know much about veterans, but I’m glad people are out there trying to help and lending an ear. She talks about just listening, not responding or adding to it, just listen to what they have to say and let them vent. 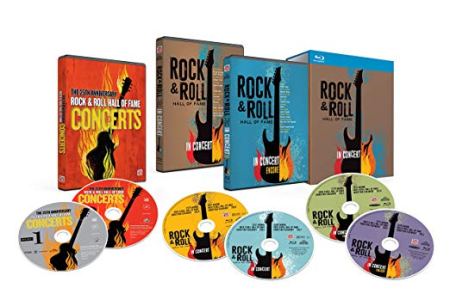 Next is Rock & Roll Hall of Fame in Concert Blu-ray. I believe a DVD edition has been out before, but this is the first time it’s been available on Blu-ray. If you read me enough you know I enjoy these sets because of the live performances. This set breaks down into three distinct Blu-ray collections: Rock Hall In Concert – Encore (2 discs), Rock Hall in Concert (2 discs), and The 25th Anniversary Rock & Roll Hall of Fame Concerts (2 discs). The Encore discs feature 44 performances from the 2010, 2011, 2012, and 2013 induction ceremonies. The highlight of this is the Rush performance and seeing the late, great Neil Peart perform again. The In Concert features 53 performances from the 2014, 2015, 2016 and 2017 induction ceremonies with the highlight to me being the Pearl Jam performances of course. The 25th Anniversary Rock & Roll Hall of Fame Concerts is probably the best overall collection with absolute legends performing. You get The Rolling Stones, Paul Simon, U2, Bruce Spingsteen, Metallica, Ozzy, and many more. If you don’t own the individual releases, this is a good grouping to have one full collection.

Frankie is one of those little adult films we don’t see too often nowadays. In the resort town of Sintra, Portugal, multiple generations gather on vacation. There is actress Frankie and her husband played by Brendan Gleeson. Marisa Tomei who knew Frankie and Gleeson’s character from working with Frankie in New York. Greg Kinnear is Tomei’s love interest. There is Frankie’s ex-husband. There’s a small family of a husband, wife and daughter. All in this quaint town with a water fountain that is supposed to bring love. It’s one of those movies you don’t mind watching because it has characters of certain ages we don’t usually see in lead roles. I don’t know if it’s something I’d watch again, but Isabelle Huppert is good in the role of Frankie and I always love Gleeson. The setting is beautiful and is a character in itself. It’s an easy watch at around 100 minutes and everyone involved is ultra talented. With the shoreline, the small town, the cast of characters, it’s just a nice little film that doesn’t always get made today. 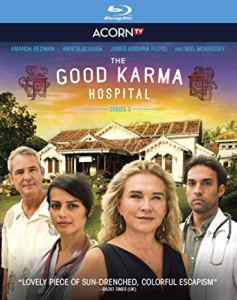 Last we have The Good Karma Hospital Series 3. This season continues its classic fish-out-of-water storytelling with Dr. Ruby leaving the Good Karma Hospital but having to return because of a crisis. She has to make amends with the head doctor and deal with Dr. Gabriel who might have a new love interest. It’s one of those cute little shows you don’t mind watching because it is simple and not heavy to deal with. So much of what we watch nowadays beats you over the head so I like having little shows like these to cleanse myself. With only 6 episodes it’s an easy binge and it has fun little side characters and a funky little setting that makes it enjoyable to watch.