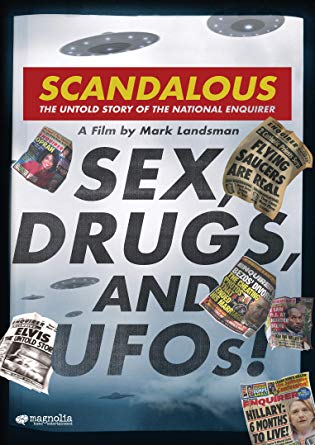 Scandalous: The Untold Story of The National Enquirer is a pretty fascinating look at the highs and lows of the legendary tabloid. It’s been around my entire life and I remember seeing it for sale on racks near grocery store counters, but I never really knew its beginnings. This documentary talks about how it all got started, its rise to the top, how it’s perceived by other publications and its turn to politics. Like the tabloid itself, it’s juicy!

Even how it got started is sketchy. It got off the ground with help from mafia money which they openly talk about. Once the son took over when the father died, he ran the publication like the mob with no hesitation of firing people, but also paying his employees extremely well and buying stories and photos other outlets couldn’t get to. One of their first big scoops was a picture of Elvis Presley IN his casket at his funeral. They sent people down to cover it because it was a huge event, then paid one of Presley’s relatives money to sneak in a camera to snap a picture. It took multiple attempts, but ultimately they got the only shot of Elvis in the casket which sold wildly.

What also intrigued me was how often they would bury a story in exchange for multiple stories or exclusives. The film brings up how they had dirt on Bill Cosby in the 1980’s and when they called Cosby about it, he talked to the editor, got it squashed and gave them interviews and stories about The Cosby Show. It also shows how celebrities would tip off the paper so they would get publicity for themselves. The king of that was Donald Trump in the 1980’s and he even had National Enquirer employees at his wedding to Marla Maples.

The film also shows it did some good. In the 1990’s, they paid sports photographers for pictures of O.J. Simpson wearing shoes he claimed he’d never wear. His defense of the bloody footprints was that the shoes that made them were too ugly for him yet the paper got photos of The Juice wearing those very shoes on the sidelines of NFL games when he worked on games. This evidence helped the families of the deceased get paid.

But of course when you think of the National Enquirer you think of negativity. They ran a photo of Princess Di who would later that day be killed. After the death of its editor/founder it changed hands a few times and got super political killing stories for one person while running full on tabloid stories of others. Throughout its history they had no issue paying big bucks for information and photos and really blurred the lines of privacy and journalism.

Scandalous: The Untold Story of The National Enquirer was a really interesting watch and I got a lot out of it to boot. The film really opened my eyes to what it took for the publication to succeed and how it was one of the reasons that journalism and news started becoming more about entertainment, gossip and viewership. Say what you will about the publication, but it made headlines long before TMZ and “fake news” became part of pop culture.