The Bad Boys Mike Lowrey (Will Smith) and Marcus Burnett (Martin Lawrence) are back together for one last ride in the highly anticipated Bad Boys for Life. 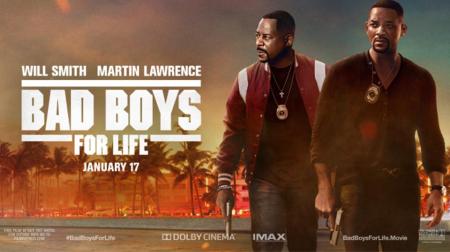 I had low expectations for Bad Boys For Life. Most sequels that take years to happen usually aren’t very good. Bad Boys II came out in 2003 and somehow that’s 17 years ago now. This third movie also doesn’t have Michael Bay directing like he did the first two films. Add in this is being released in January (a dead zone for non-Oscar worthy films) and well you can see why I was hesitant about it.

After seeing the movie I have to say, I quite liked it. I’m shocked it’s not opening in May or June to get some of that early Summer blockbuster money because it’s right in line with franchise and action/comedies that open that time of year. Sure the plot twist you’ll figure out instantly especially if you’ve seen another recent Will Smith movie, but it’s honestly a movie I’d watch again and had fun with.

What I like most of about it is that the two leads, Will Smith and Martin Lawrence, are playing age appropriate characters. The first two movies made them look like Supermen (especially Smith), but a lot of the jokes in the film are about their age. Lawrence’s Marcus is now a grandfather and there’s a running joke about him needing to wear glasses. Smith’s Mike character is still a bachelor and thinks he’s bulletproof, but is learning that maybe he does need help and that technology can be more beneficial than kicking in doors. These two men are naturally funny and have great chemistry together still after all these years, but it’s this new element of age and getting old that provides a lot of laughter. There’s even a scene where they race each other and Marcus picks up Mike with a minivan.

In this series you expect that comedic timing between them and you also expect action. There’s some quality action in here as well. Even without Bay directing there is a great action sequence involving them on a motorcycle and sidecar. There are numerous shootouts and the final take down sequence is pretty cool with lots of guns, fighting and fire. Alexander Ludwig (new to the franchise) gets to unleash his inner Bjorn Lothbrok (his character in Vikings) which makes for a funny scene. There are helicopters, motorcycles, fast cars, fire, guns and everything you expect and want from this film

Bad Boys For Life is far from perfect. The twist just isn’t surprising and there a couple of new characters that didn’t work for me or don’t bring much to the table. Because of the new characters and the two leads being older I definitely think they expect a spin-off film/films and the movie ends with them hinting at that. There’s an absolutely hilarious cameo not everyone understood, but if you know who the person is you’ll be laughing like I did. For a movie I expected so little from, I have to say, I had a ton of fun with it. I haven’t seen the first two films in years and I’m sure I might have missed a few references in this because of it, but if you’re haven’t seen them in a while either you should still enjoy this. It has lots of throwbacks to the previous films with certain slow motion scenes and characters standing a certain way so if you are a big fan you’ll enjoy that as well. I’m shocked to say this because I thought the movie would be disappointing, but it’s actually…

Screenplay by: Chris Bremner and Peter Craig and Joe Carnahan

Produced by: Jerry Bruckheimer, Will Smith and Doug Belgrad