The stoner icons who first hit the screen 25 years ago in Clerks are back, bringing high times and hilarity in the newest star-studded adventure from Kevin Smith’s legendary franchise. When Jay and Silent Bob discover that Hollywood is rebooting an old movie based on them, it’s game on, as the clueless duo embark on another cross-country mission to stop the madness all over again! With all-star cameos from Matt Damon, Ben Affleck, Chris Hemsworth, Rosario Dawson, Melissa Benoist, Joe Manganiello, Molly Shannon, and more, this is the kickass comedy reboot you’ve been waiting for. 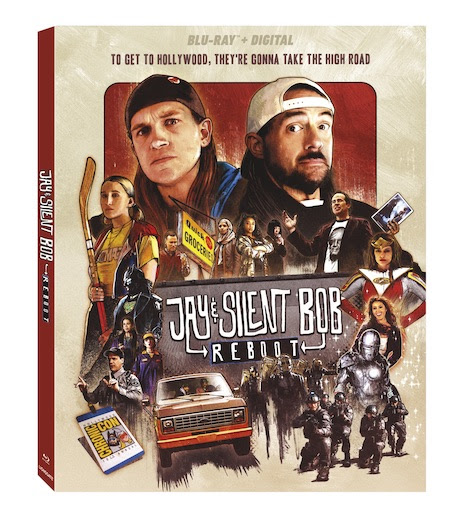 I grew up on the films of Kevin Smith. Clerks, Mallrats, Chasing Amy, those were my first real introduction to independent films along with the works of Ed Burns, Jon Favreau and others. Sure some of Kev’s recent movies aren’t considered the classics his 1990s ones are, but I’ve still seen them. His fandom can argue about when they think he jumped the shark (Jersey Girl? Cop Out? Red State?), but say what you will about the man, he makes the movies he wants to make. Case in point, Tusk and Yoga Hosers.

That brings us to Jay and Silent Bob Reboot. Jay and Silent Bob are still very much the stoner duo we’ve grown to love over the past few decades, but Smith adds so much more to them this time around. He goes very meta with his film making a reboot mocking remakes and reboots. He takes the plot of Jay and Silent Bob Strike Back and does it again adding youth and diversity which is what Jason Lee’s Brodie Bruce explains to them in this film. A reboot is taking what works from the original and adding just enough to make people pay for it all over again. As much as I enjoy Star Wars: The Force Awakens, this is exactly what they did, gave us the characters we loved, added some youth and relied heavily on nostalgia.

And that’s what Kevin does in Reboot. The pair decide they have to go to Hollywood to stop a movie from being finished. That’s Strike Back’s plot and he’s able to use that same plot because Hollywood is now rebooting the film they wanted to stop then. It’s much easier to understand in the movie. Along the way we get the nostalgia rush from seeing View Askew characters pop up. Shannon Elizabeth’s Justice (from Strike Back) makes an appearance and has a big surprise for Jay. They stop at a Mooby’s. It opens outside the Quick Stop and we see Dante. Alyssa Jones (Joey Lauren Adams) from Chasing Amy makes an appearance as does the previously mentioned Brodie. There is another cameo I’ll talk about in a bit as well.

With the nostalgia he adds in youth and diversity using his daughter Harley Quinn Smith and three other actresses who join Jay and Silent Bob on the trip west. It’s intentional that they are all female and multi-ethnic because it’s mocking reboots that do that. Maybe at first you might think they are one-dimensional stereotypes, but there’s a huge plot twist that shows Smith had much more in mind than meets the eye. He’s actually playing with our own stigmas towards diverse characters by flipping it all at the end.

But what I always loved about Smith’s early movies is that he came across as a hopeless romantic. There are plenty of fart and dick jokes, but if you take a look at Mallrats and Chasing Amy, there’s heart to them. Those characters just want to be happy and find love (not necessarily in the back of a Volkswagen). He returns to form with Reboot. Both Kevin Smith and Jason Mewes are fathers in real life and their characters reflect their real life growth. They still love their weed, but Jay gets some unexpected news and has to take a hard look at himself over the course of the movie. These two characters couldn’t have been portrayed this way 20 years ago because Smith and Mewes weren’t the men they are now. They’re still Cheech & Chong, but with layers.

Then there is the cameo I hinted at earlier. I don’t think it’s a spoiler at this point, but Ben Affleck returns as Holden McNeil his character from Chasing Amy. I’ll be honest, I wasn’t prepared for this scene. Affleck and Smith have had some issues that I won’t get into, but I’m glad whatever had to be worked out got worked out because this is a beautiful scene. Holden has a great monologue that not only reflects on his character, but Ben himself and probably Kevin and Jay as well. It moved me and I wasn’t expecting that. The self reflection not only works for all these men/characters, but as someone not quite as old as them, it still made me think about things. Even with little jabs about Bruce Wayne/Batman, the scene proves one thing, no matter what stage in life you are, in some shape or form, you’re always chasing Amy.

Jay and Silent Bob Reboot is a film that couldn’t be done in the past. Smith as a writer couldn’t have written the underlying storyline of fatherhood until he became a father. Smith (and Affleck) have had to go through highs and lows to be able to have something to reflect upon in order to do a movie like Reboot. Yes it’s a stoner comedy making fun of the lack of originality in Hollywood, but it’s much more when you really take a look at it. In the bonus features there is a nearly hour long cast interview section which I watched right after the film. In it, Kevin’s wife talks about this movie being a close runner-up to their family’s home movies because of everyone coming back together and telling the story it tells. That’s how personal it feels to a lot of them. I’ve met Kevin, but I don’t know the man personally and even to me the film feels personal. Long before the MCU, the DCEU and crossover TV episodes, Smith’s View Askew had its own universe with characters going from movie to movie. I grew up on these characters and I enjoyed this trip down memory lane. If you’ve given up on Smith, this one is full of Member Berries and will have you thinking about the time you met Kevin with Stan Lee at a Halloween screening of Spider-Man 2 in Los Angeles. Maybe that one is just me, but if you want to remember the good ol’ View Askew days then the film is…