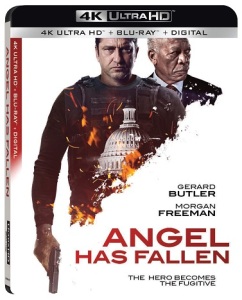 Not a whole lot for us this week probably because of Thanksgiving. The biggest release (that I’ve gotten) is Angel Has Fallen. I have a soft spot for this Gerard Butler/Morgan Freeman franchise which started with Olympus Has Fallen was followed by London Has Fallen and now gives us Angel Has Fallen. Are they great movies? No, of course not. Are they dumb fun with unrealistic stories and big, loud explosions and action? Hells yeah! This sees Butler’s Secret Service Agent character Mike set up for an assassination attempt on Freeman’s President character and honestly, who cares? It’s just enough plot and you know Mike didn’t do it and will find a way to prove his innocence and on the way you ask for him to kill people and blow stuff up. And boy do they blow stuff up. The assassination attempt is pretty crazy with drones dive bombing around a shore line wiping out other agents and taking out the President’s boat. Butler saves Freeman in time and both end up in the hospital where “evidence” points at Butler. Mike escapes through unwanted help who try to set him up even more now that the President isn’t dead. There’s a transport scene with action and shooting and a tractor trailer scene with action and shooting. Then we meet Nick Nolte. I love wild hair/crazy beard Nick Nolte and he’s great in this. You automatically know he’s nuts and will bring comedic relief and much more. He’s a recluse in the woods which means he either has an arsenal of guns or is going to light up the forest. I won’t tell you which. He’s a great addition to the franchise. There are some great explosions with guys getting blown up sideways and backwards & forward. They blow up a building and there is all kinds of gun action. Butler is a master of these roles and Freeman gives a few monologues which is great.  I didn’t love the addition of Jada Pinkett Smith and Piper Perabo replaces Radha Mitchell as Mike’s wife from the first two films, but if you are a fan of the franchise (like I am) then you’ll like this. It looks and sounds great on HD and comes with some pretty solid bonus features as well.

Sticking with action movies, there is a new limited edition RoboCop release this week. It has gone through a 4K restoration from the original camera negative by MGM, transferred in 2013 and approved by director Paul Verhoeven. The film is a sci-fi classic and has been a personal favorite since I was a kid (and was probably too young to have seen it in the first place). It stars Peter Weller as a cop who is terminally wounded and turned into the cyborg RoboCop to tackle the streets of Detroit. Kurtwood Smith is the bad guy RoboCop wants to hunt down because it was him and his gang who almost killed him and terrorize the city. It’s a look at police corruption and private industries taking over social service like law enforcement, but I’ve always just liked it for the action and violence. With iconic lines like “I’d buy that for a dollar” and scenes like RoboCop shooting between the woman’s legs, it’s such a great 1980’s action flick. It had sequels and a remake, but nothing beats this original. The restored film looks great and it comes with a slew of bonus features including Director’s Cut and Theatrical Cut versions of the film, multiple commentaries and all kinds of other cool features. As of right now, this is THE version to own of the film. It’ll cost you more than a dollar, but it’s worth the price. 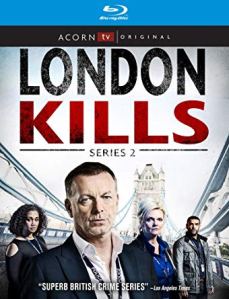 Now for some TV releases. First is London Kills Series 2. This is a detective show set in London obviously and runs 5 episodes making it a quick and easy binge. There’s an overlapping storyline, the main DI’s wife is still missing and this season sees 2 of his colleagues suspicious and looking into it. Then every episode has its own sort of mystery that gets solved. Episodes involve the remains of a body found yet this person had been sending his sister postcards (from the grave!), a boy finds his grandfather dead in a a pub, a Portuguese nanny is murdered, a father and son are shot gang execution style in broad daylight, a person with information about the DI’s wife is found dead, but she is now believed to still be alive. It’s a pretty solid show and being only a few episodes makes it a lot more enjoyable and doesn’t tie up a lot of your time. It has a good style to it too.

Next is Line of Duty Series 5 another detective show out of England. This one is six episodes long. The major storyline for Series 5 is the death of cops during a drug seizure which leads into an investigation of corrupt cops, an undercover cop and a kingpin. It was a pretty good watch with fake information being sent out to try to flush out the dirty cops. Using the undercover agent pushes them closer to taking down the crime boss but also lets out a bunch of secrets by the finale. I think I liked London Kills a bit more because each episode had more of an individual story, but Line of Duty is still a pretty easy watch as well.

Last we have The Fare which came out last week but I didn’t get my copy until later in the week. It’s sort of a Groundhog Day/Edge of Tomorrow sci-fi flick about a cab driver stuck in a time loop with a female passenger. She can remember things from each ride but it takes him a while to start remembering. I don’t know if I’m familiar with either lead, but overall I liked the movie. It’s basically just two people in a cab with some flashback scenes so you’re watching these two people trying to figure things out with the voice of the dispatcher. I don’t know if I loved the explanation because they definitely lead you into thinking it’s more alien or time travel based but I won’t spoil it. For a little film I had never heard of, I liked it. It’s not too repetitive like some of these movies can be because it’s relatively quick and both leads hold your attention throughout. I can see a lot of people enjoying it. I just wish the ending was different.