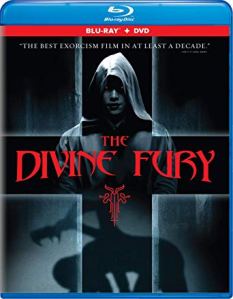 Not a lot this week and I haven’t gotten a mainstream title yet so I’ll start with The Divine Fury. I wasn’t sure what to make of the film at first. It sees a young boy lose his police officer father who was dragged down the street during a traffic stop. It jumps years later and the boy is now a famous MMA fighter who seems to hear voices in his head. It jumps back to Korea and becomes an Exorcist type flick. The main character meets a priest who performs exorcisms and ends up helping him even though he doesn’t believe in God. He lost his faith when his father was killed and has fought for years because of it. He has the stigmata which helps him fight demons. The last fight sequence is pretty great and even though the film isn’t what I thought it would be, I overall enjoyed it. I’m usually not a fan of Asian horror because it’s usually dealing with ghosts, but the possession sequences were good and having an overall bad guy works. I was hoping for a little bit more action, but the action I did get is pretty solid. The film leaves it open for a sequel with another priest.

Second we have Taken Down Series 1 out of Ireland. This TV show is about Nigerian immigrants living in an immigration center in Ireland and one of the girls is found dead. There is one lead family with a mother and two teen sons, the investigators trying to solve the death, the man who runs the center and a sex slave organization. It’s six episodes over 2 discs and I binged them over two nights. It’s a pretty decent show, but from the beginning I could tell a lot of things would be interconnected and that the older son knew more than he was letting on. They also push the man who runs the center too quickly on the audience too. Brian Gleeson (son of Brendan, brother of Domhnall) is shown to be shady from the beginning so you expect him to be tied into the death even if it’s just slightly. But overall it’s a decent show from across the pond that fans of shows like London Kills,The Truth Will Out and similar shows will enjoy.

The third and fourth releases this week are pretty baffling. They are Canadian films from the same director and both have separate storylines running through them that don’t necessarily connect. All seem to be about young love or young lives in general. First is The Demons. The boy on the cover is Felix who comes across as a pervert to me. He seems to obsess over the female lifeguard and also grinds on his best friend while playing husband and wife. While the film focuses on him swimming and going to school there’s a boy kidnapped and killed. The movie is awkward to watch and if it has a point, I didn’t get it. I’m sure someone loves it, but that someone isn’t me.

The director followed that up with Genese where we see Felix again (much later in the movie at a camp), but this one focuses on a boarding school boy who struggles with his sexuality and his half sister who’s in a relationship but her boyfriend suggests opening it to others. She has some fun, but gets hurt and like the previous movie, I genuinely have no idea what I’m supposed to take away from it. I guess both films are well made, but both are super awkward to watch at times with scenes involving younger actors. This one doesn’t mix in a storyline that doesn’t feel out of place unlike the child kidnapping in the first one. But neither are films I’d watch again. 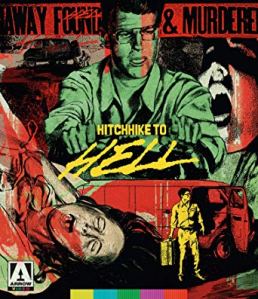 Hitchhike to Hell is your classic horror flick from 40 years ago. It’s not very good and it looks pretty bad, but it’s also kind of terrible enough to enjoy. Howard is a mild-mannered man (he might be on the spectrum in today’s world) who delivers clothing. He picks up hitchhikers and kills them if they are runaways, only runaways who don’t like their mama. He doesn’t remember killing anyone and comes home to his mother and drinks his root beer. His boss is getting angry that he’s late and missing deliveries and the cops try to figure out who’s dropping bodies around them. It really isn’t good, but it’s one of those movies you’d watch in the early 80’s on paid cable. It’s been restored but never looked great in the first place and it comes with some cool bonus features. Definitely a cult flick for diehards. 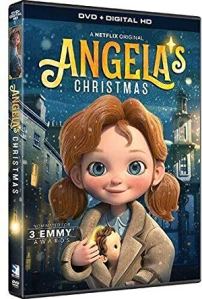 Mill Creek Entertainment has out some holiday releases this week for you. First is Angela’s Christmas based on Frank McCourt’s Angela and the Baby Jesus. Brian Gleeson makes his second appearance in this article as he lends his voice to this Netflix Original along with Ruth Negga, and Lucy O’Connell. It’s actually a really charming film that’s safe for families. I usually don’t like computer animation, but it’s very well done here. I can see families really enjoying sitting down to watch this one and it was nominated for 3 Emmy Awards. The late Dolores O’Riordan (The Cranberries) performs Angela’s Song as well. I was really surprised at how much I enjoyed this one. 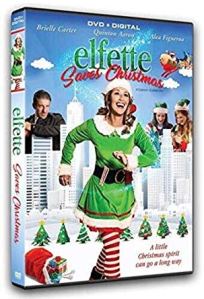 Second we have Elfette Saves Christmas. As a single adult male without children, this one was a lot less charming and a lot more painful to sit through compared to Angela’s Christmas. It’s about a female elf on vacation who finds out Santa Claus is kidnapped in New York by the mob and she must go there to save Christmas. It’s pretty rough. Maybe families with young kids will enjoy it, but it lacks all the comedy and heart of something like Elf. Young kids are the only ones who might enjoy the colors and costumes, but I don’t think parents want to explain what the mafia is though. I have no idea who this is geared towards or who to recommend it to.

Third we have Down Home Christmas – 5 Movie Collection. Unlike Elfette, I know exactly who these movies are for, my sisters and mom. They all love the Hallmark type Christmas movies and watch them year after year so I know they’ve probably seen these. They feature names you expect in these types of flicks like Beverly Mitchell, Hilarie Burton, Jason London, Cheryl Ladd, Barry Bostwick, Randy Travis, Markie Post, Ed Asner, and Alan Thicke. The five films are: The Christmas Contract about a recently single woman going back home and worried about running into her ex who has a new girlfriend, Hometown Christmas about a woman returning home and wanting to resurrect the live Nativity scene her mother used to organize but she has to work with her high school sweetheart, Christmas in Mississippi about a photographer returning home to Mississippi where her town is resurrecting their festive light show and she must deal with an ex, Christmas on the Bayou about a divorced executive returning to her small hometown and rekindling an old flame, Wish Upon A Christmas about a woman going to her hometown to close a factory but the owner is her former high school sweetheart who thinks she’s there to save it. Yes all five movies are about returning home, running into former partners and Christmas magic/miracles. Clearly you know if these are for you or not. 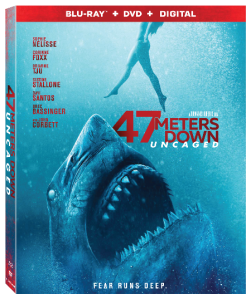 Last we have 47 Meters Down: Uncaged which came out last week but I got my copy late. It’s sort of a sequel to the 2017 surprise hit 47 Meters Down. I say sort of because if you saw that movie you know it really can’t have a sequel. That movie saw 2 women shark diving and their cage becoming loose and landing, you guessed it, 47 meters down. Well this doubles the action by having 4 women! They aren’t in a cage hence the uncaged part, but instead these 4 women find themselves in an underwater Mayan city. There are sharks there of course and all the tropes of shark/animal movies come about. Just like the first movie they worry about running out of air. No one knows they are there. They run into others working there and bodies start getting chomped. This one did seem to rely more heavily on CGI sharks and effects or maybe I’m not remembering the first one that well. The first one made solid money on its budget even though I thought it was lame and the ending was a cop out. This one turned a decent profit but wasn’t the hit the first one was. This has the better ending even if it’s a bit far-fetched. I didn’t love either movie and I’m thinking the franchise is dead in the water at this point, but I know some people who do enjoy them. The CGI sharks are as bad as you expect from CGI sharks and I don’t think I recognized anyone besides John Corbett in the film. If you liked the first one you might like this, but I just couldn’t get into it.