Synopsis:
The King of Queens consistently delivered laughs for nine seasons, making it one of the most popular and longest-running comedies in television history! Kevin James stars as Doug Heffernan, a lovable regular guy with an adoring wife, Carrie (Leah Remini), and a frustrating father-in-law (Jerry Stiller) under his roof. Packed with a crazy cast of characters, hilarious situations and plenty of great guest stars, this is one show that brings the goods! 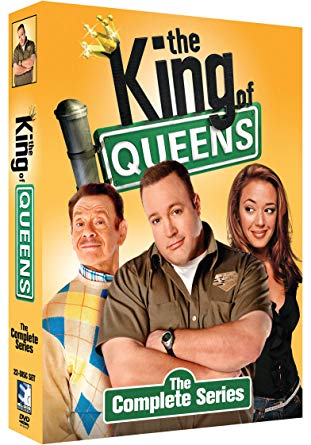 I’m sure The King of Queens has been available before as a complete series package, but I always enjoy Mill Creek’s releases because of the cost and packaging. Instead of $100+ or more, these releases are more wallet friendly and still feature every episode in smaller packaging making storage easier.

The show made Kevin James a household name and stuck with tried & true sitcom storytelling. It’s the classic overweight guy with out of his league wife we’ve seen in The Simpsons, The Honeymooners, All in the Family and more. Mix in the everyday/working man angle and it’s television writing 101. That’s not a slight, it’s why the show worked.

Kevin James is a funny guy and his Doug was that everyman type. He went to work every day. He enjoyed having a good time with his friends. He had a great wife. He had an annoying father-in-law. That’s a sitcom designed to last for years and it lasted nine of them.

What’s funny is, I never get into the show until syndication and home video. I don’t remember ever watching it when it aired on CBS from 1998 to 2007. I watched reruns and on DVD releases like this one. I never watched Everybody Loves Raymond or anything on CBS besides sports. At this point in time it was all about FOX and NBC sitcoms for me. So even though this was a widely popular show and landed Kevin James a Primetime Emmy nomination, most of the episodes are new to me when watching a complete series box set like this!

Kevin James would transition into movies which brought him some success and some failure (which lead him to a return to TV with Kevin Can Wait), but ultimately he’ll be remembered for The King of Queens. If you were a fan, this new Complete Series Collection from Mill Creek is a must own.