BAFTA nominee Adrian Dunbar (Line of Duty) is “chilling” (Irish Examiner) in this “gripping…intense psychological drama” (Irish Mirror) about the lies that can fracture a family. Loner Cat Hogan (Carolina Main, Unforgotten) returns to her hometown following the sudden death of her mother. But when details about the accident don’t add up, Cat suspects her father (Dunbar), a well-respected doctor she has distrusted ever since a childhood trauma. Did he have a hand in her mother’s passing, or is Cat really the troublemaker her siblings perceive her to be? As she sets out to find the truth, Cat uncovers secrets long buried and risks destroying what’s left of her family ties. 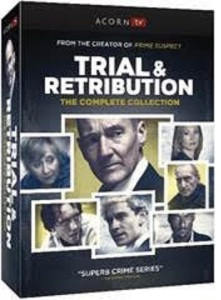 Created and written by Lynda La Plante -“the playwright laureate of women crime-stoppers” (NPR’s Weekend Edition)-this long-running British series displays the same hard-bitten sensibility and emotional resonance that made Prime Suspect a television landmark. The 22 feature-length mysteries in this complete collection each follow a case from the scene of the crime to the courtroom verdict. Boasting innovative storytelling and uncompromising realism, Trial & Retribution powerfully portrays the psychological scars that violence leaves behind.

Blood: Series 1 is a pretty solid thriller that keeps you guessing throughout. When Cat’s mother dies, she returns to her small hometown. She’s always had issues with her father and feels like an outcast to her brother and sister and the town. She starts to ask questions about her mother’s death and slowly thinks her father was involved. Her father always insisted she made up a story when she was younger, but as she digs deeper, she thinks her father may have killed her mother and been involved with a death in the past.

With only 6 episodes Blood: Series 1 is a quick binge. It’s a tight show that gets right into it and develops the backstory of the characters quick enough to understand each perspective. You are never quite sure just how involved the father is and as clues and secrets come out, they quickly get explained which keeps you guessing as well. I’m not sure if l loved the final explanation because it kind of feels like a cop out. I can’t explain too much without spoiling it of course. It sort of ends on a cliffhanger or at least keeps the door open to see where the story and the characters go next.

I had never heard of Trial & Retribution which ran from the late 1990’s through early 2000’s. This complete collection is all 22 mysteries with David Hayman as the star with other names like Kate Buffery, Victoria Smurfit, Gemma Jones, Dorian Lough, Richard Durden and others appearing in many episodes. That’s not including guest stars and one-offs. Michael Fassbender is in two episodes so is Iain Glen. You’ll see Carey Mulligan, Hugh Dancy, Rhys Ifans, Michelle Fairley, Andrew Garfield, Rosamund Pike, Naomie Harris and many others pop up throughout the series.

The easiest American comparison is Law & Order although this is much more in-depth and stylized. You get the event all the way through trial, but it’s much more than that. It’s from Lynda La Plante who also gave us Killer Net, Supply & Demand, The Commander, Prime Suspect and more.

With such a long running show there are seasons/episodes that were better than others. I seemed to like the earlier mysteries over the later ones. They seemed more coherent and the characters seemed drawn out better. Later mysteries were based on errors and incompetence (at least it seemed that way) and the writing seemed less thought provoking. It’s a well acted and well made show, but I do think the writing was better earlier on. I don’t know if I loved the overuse of split screen at times either.

But this Trial & Retribution: The Complete Collection is a beast and must own for fans. It comes with some cool bonus features as well including Behind-the-scenes documentary with cast and crew interviews, interviews with Lynda La Plante, David Hayman, Victoria Smurfit and Colin Salmon and more.