The ever-prolific Takashi Miike, the director behind the likes of Audition, the Dead or Alive trilogy and Blade of the Immortal, returns with this intergalactic epic in which a team of space explorers find themselves pitched against a horde of oversized anthropomorphic cockroaches.

In the mid-21st century, humankind has been forced to look to colonising other planets as a means of combating overcrowding on Earth their first stop, Mars. With a population of cockroaches having been introduced on Mars some 500 years prior to help prepare the way for human colonization, a manned mission sets out to the red planet with the aim of clearing away the bugs. Upon arrival, however, they discover that the roaches have evolved to huge, vicious creatures capable of wielding weapons.

Based on the popular Manga series of the same name, Terra Formars is an action-packed space adventure brought to life by one of Japan s most celebrated contemporary filmmakers. 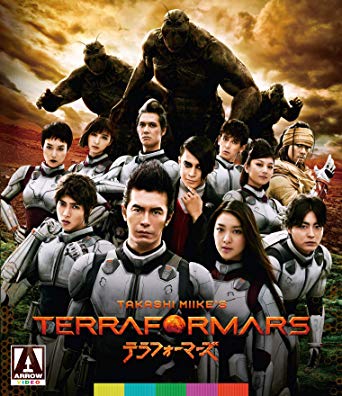 Terra Formars is a pretty bananas science fiction/horror-ish flick that I had fun with. I didn’t realize it was a Takashi Miike before I popped it in the Blu-ray player but after watching it, it makes 100% sense.

I’m usually not a big fan of CGI films especially ones that rely on it to create their worlds, characters and what not, but overall I didn’t mind it here. Practical effects are too costly nowadays so when you need thousands upon thousands of human/cockroach hybrids on Mars, well you have to CGI it.

The film is about a group of castaways mostly with criminal backgrounds sent to Mars in the future to “kill cockroaches”. They are told they will be paid or kept out of jail if they can kill the cockroaches so humans can start living on Mars after years of terraforming. They aren’t told what’s happened to the roaches and that it’s pretty much a one way flight.

Of course it being a Miike film, it goes off the rails and I appreciate that. The roaches are bigger than humans and the humans are given drugs to make them have different bug characteristics and it becomes an onslaught of humans vs. roaches. There are some violent deaths as you expect from Miike and I was there for that.

Terra Formars is a nice surprise. I knew absolutely nothing about it and I’m glad I didn’t. I tend to like Miike films and this one is a great mix of sci-fi and horror. It has Pokemon/Digimon inspired creature effects with the humans getting bigger and more powerful with more dosing. It has a zombie type feel with the roaches and a sci-fi vibe with the mission and space setting. I dug it.