Robin of Loxley (Taron Egerton) a war-hardened Crusader and his Moorish commander (Jamie Foxx) mount an audacious revolt against the corrupt English crown in a thrilling action-adventure packed with gritty battlefield exploits, mind-blowing fight choreography, and a timeless romance. 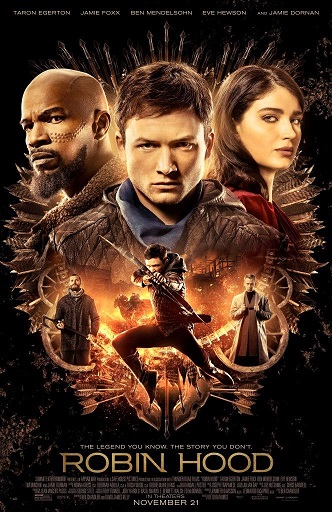 Even though Taron Egerton gives his all, Robin Hood is kind of a hot mess. I’m a big fan of Egerton, but despite ridiculous archery training, he just can’t save the movie from being more than just alright. The action sequences are great, but they rely heavily on CGI instead of good practical effects.

So many things make the film marginal at best. Despite 99% of the film taking place in Nottingham, somehow major characters have different accents. Jamie Dornan speaks in his native Irish accent. Eve Hewson speaks in a sort of Irish accent. Jamie Foxx, the one character who SHOULD sound different being a Moor slave, somehow has a British accent at times mixed in with his regular every day American sound. If the majority of the characters are from Nottingham, they should sound the same.

With this being a period piece there should be period accurate wardrobe and design. Some of it just doesn’t look right. There are clothing items that characters wear that look like stuff we wear today especially the leather items.  Maid Marian wears a black leather outfit that looks mighty good on her, but would not have been around back in the day.

Besides the accents, inaccurate clothing and overly done CGI, the film also lacks a great score. Period pieces should have great music to go with them and I don’t remember anything about the score or if it even had one. It should swoop in and move you and this doesn’t do that. There is also a workout montage that looks like a commercial for CrossFit. A certain fan base will enjoy a shirtless Mr. Egerton, but there’s no need to show us him lifting iron chains. Yes archery training is necessary, but there’s no need for a sequence that would rival Rocky training to fight the Russian.

I’m not sure what movie Jamie Foxx thought he was in. Ben Mendelsohn is playing the same character as he did in Rogue One and add in all the rest of negatives I talked about and Robin Hood is about as memorable as Prince of Persia and last year’s King Arthur: Legend of the Sword. Despite Taron Egerton’s valiant effort, the film is too heavy with CGI and throw away scenes. It’s a shame because I really like Egerton.