Life has become a balancing act for Adonis Creed. Between personal obligations and training for his next big fight, he is up against the challenge of his life. Facing an opponent with ties to his family’s past only intensifies his impending battle in the ring. Rocky Balboa is there by his side through it all and, together, Rocky and Adonis will confront their shared legacy, question what’s worth fighting for, and discover that nothing’s more important than family. Creed II is about going back to basics to rediscover what made you a champion in the first place, and remembering that, no matter where you go, you can’t escape your history. 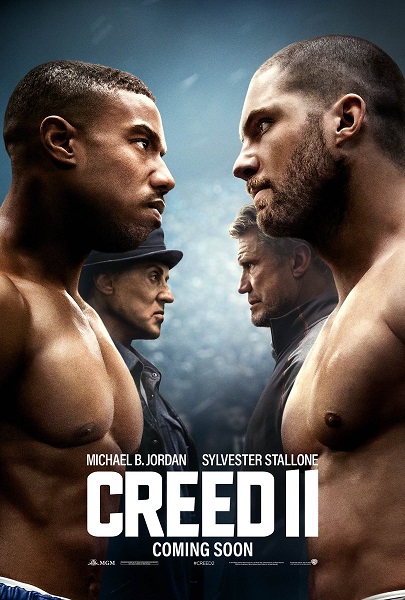 I’ll cut right to the chase, Creed II is nowhere near as good as Creed. That being said, it’s still a good film and should do very well at the box office.

The biggest difference to me is the style/direction. The first film, like the first Rocky, had an independent film/street vibe to it. They were both rough and edgy and had stories about underdogs. Both are fantastic films. This sequel, like the Rocky sequels, is more polished and feels like a studio film. Ryan Coogler didn’t direct this movie and you can tell. It lacks his style completely. This is a lot more story driven and wants you to feel emotions that I didn’t really feel.

That’s probably the biggest negative, Michael B. Jordan’s Adonis Creed character is well established and opens the film in a fight for a title. He’s not the underdog he was in the first film. Dolph Lundgren returns as Ivan Drago and his son Viktor Drago wants a shot at the champ. Ivan Drago killed Creed’s father (Apollo Creed) in Rocky IV and Adonis thinks he needs to take the fight. That should be the drama of the film, but they add in Creed’s continued romance with Tessa Thompson’s Bianca which leads to a baby and a move west. Sure the baby is super cute and there are some funny scenes with Jordan trying to be a dad, but it’s too much for me.

Add in the drama of son fighting the son of man who killed his father, Rocky wanting nothing to do with the fight, recovering from a fight, a new baby and Bianca’s music career and it’s just too much. It loses a little bit of its focus and I just wasn’t feeling the Bianca character as much as I did in the first film.

But the flick is good. Phylicia Rashad absolutely steals every scene she’s in. I’m a huge Dolph Lundgren fan and it was great seeing Ivan Drago again especially with Rocky Balboa. Florian Munteanu is a beast of a man and fits the role of Viktor Drago perfectly. He’s not asked to do much dramatic work which is smart, but he’s honestly not that bad either. Not only is the film the continued story of Creed, but it also gives some story behind what happened to Ivan Drago post Rocky IV. The fight scenes are pretty solid and Jordan and Sylvester Stallone continue to have great chemistry together.

Creed II won’t get the outright critical love and award talk the first film got, but that’s fine. It’s still a good movie and has two fantastic surprise appearances in it. It will make bank, but I honestly hope the franchise stops here. This film wraps up really nicely and I honestly have no idea where they can go from here. Even though the first one is better, this is still…