Set in the fictional town of Palisades, California and in the hallways of Bayside High, the breezy adventures of Zack Morris (Mark-Paul Gosselaar) and his friends — Kelly Kapowski (Tiffani-Amber Thiessen), A.C. Slater (Mario Lopez), Jessie Myrtle Spano (Elizabeth Berkley), Lisa Turtle (Lark Voorhies), and Samuel “Screech” Powers (Dustin Diamond) — were a cultural touchstone for a generation of teens, changing teen programming forever and launching the careers of its break-out stars. Now, home audiences can relive the laughter, lessons, and love all over again with this loaded set containing more than 46 incredible hours of Bayside bliss, including every episode from 1988’s “Good Morning, Miss Bliss” which became “Saved By the Bell: The Junior High Years” and the fan-favorite “Saved by the Bell” to “Saved By the Bell: The College Years” and the two feature-length TV movies that followed. 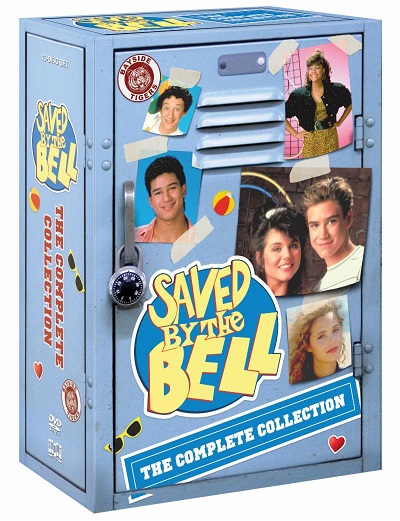 Saved by the Bell: The Complete Collection came out a few weeks back from Shout Factory and it’s a pretty ridiculous collection for Bayside fans. It is literally everything you ever saw and then some involving Saved by the Bell.

I grew up watching the show including the not so great College Years. It wasn’t as dramatic as Beverly Hills 90210, but it certainly had its moments Everyone remembers Jessie Spano freaking out on caffeine pills! But more importantly as a boy who pretty much hit puberty when this first aired, I remember Kelly Kapowski. I think we all remember Kelly Kapowski because there are T-shirts with her on them to this day.

The show started out in Indiana when it was called Good Morning, Miss Bliss. Hayley Mills was Miss Bliss with Zack, Lisa and Screech being part of the show.  Dennis Haskins played the school principal, Mr. Richard Belding. There were some other characters, Zack had another best friend type beyond Screech named Mikey. It ran for 13 episodes and is of course part of this collection.

Then the show become Saved by the Bell, got rid of Miss Bliss, but kept Zack, Screech, Lisa and Mr. Belding and moved to California. They added Jessie Spano, AC Slater and Kelly Kapowski and became the show we think of today. Watching it nowadays the show is super cheesy, but I’d be lying if I said I didn’t watch every episode back in the day. This collection certainly brought back some memories.

This also includes The College Years which saw some of the cast in college and let’s be honest, that wasn’t the same show. It’s not as good. It’s not as funny and the new characters didn’t have the same chemistry. This collection also features the made for TV movies where they go to Hawaii and you finally learn what happens after the cliffhanger at the end of The College Years that didn’t get explained because of cancellation.

Teen Primetime Dramas today are outrageous and X-rated compared to Saved by the Bell, but the show proved almost 30 years ago that there was an audience out there for it. Without it paving the groundwork, would we have a show like Riverdale on TV nowadays? Saved by the Bell: The Complete Collection is everything fans want in one fantastic box set. It really is quite impressive and I took my time going through a lot of it. It’s 16 discs of Bayside with some Indiana of course!