GOODBYE CHRISTOPHER ROBIN gives a rare glimpse into the relationship between beloved children’s author A. A. Milne (Domhnall Gleeson) and his son Christopher Robin (Will Tilston), whose toys inspired the magical world of Winnie the Pooh. Along with his mother Daphne (Margot Robbie), and his nanny Olive (Kelly Macdonald), Christopher Robin and his family are swept up in the international success of the books; the enchanting tales bringing hope and comfort to England after the First World War. But with the eyes of the world on Christopher Robin, what will the cost be to the family? 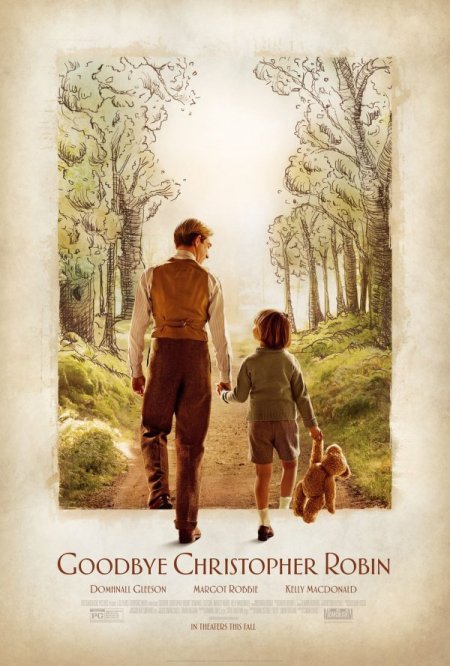 Goodbye Christopher Robin is just delightful. Domhnall Gleeson continues his run at Papa Brendan Gleeson’s title as best actor in the family. He, along with the rest of the cast, is fantastic in the film.

I knew nothing of the story behind the creation of Winnie the Pooh and his friends. If you know nothing about the true life of Christopher Robin and A. A. Milne, do yourself a favor and don’t look into it before seeing the movie. The less you know, the better.

The film focuses on Milne’s return to England after fighting in the Great War (World War I). Milne comes home a changed man who doesn’t enjoy his life in London as a playwright. He moves his family to the countryside. His wife, played by the spectacular Margot Robbie, misses her life in the city and returns to the city leaving Milne alone with his son Christopher Robin and their nanny (Kelly Macdonald). When Olive the nanny needs to take a leave of absence, Milne bonds with his son and creates the world of Winnie the Pooh and the Hundred Acre Wood. His stories capture the world’s attention making celebrities out of himself and unfortunately his son. The world is more interested in the fictional Christopher Robin than the actual boy who struggles with his new fame.

The cast is great. Gleeson will most likely get ignored come award season, but I thought he was brilliant in this. Johnny Depp was nominated for an Oscar for his performance as J. M. Barrie in Finding Neverland, unfortunately the younger Gleeson doesn’t have the pull to make sure he gets nominated for this film. Gleeson continues to impress me.

Margot Robbie plays such a terrible person that it’s the first time I found myself rooting against Robbie. She’s good as usual and I really want to know how accurate her portrayal is. I’ve been a big fan of Kelly Macdonald since Trainspotting and like Robbie, she is always good. The young actor playing Christopher Robin, Will Tilston, will surely be getting many more offers after this. Whoever discovered the young lad did a great job finding him.

Goodbye Christopher Robin is a charming little film. There are generations of us who grew up with Winnie the Pooh, Tigger, Eeyore and the others and it’s an interesting look at how they came about. I’m interested in how Disney eventually got their claws on the characters now as well. The cast is great. The story is fascinating and the setting is magical.