It’s a small week for us in terms of releases, four films have a supernatural theme to them, five a Christmas one. So to get you ready for Halloween, here are some horror/supernatural flicks to check out and some early Christmas releases.

First is the biggest named film on the list, Wish Upon. The movie didn’t do what they expected it to do at the box office and I’m not sure why. It’s from the director of Annabelle and on face value fits right into the mold of today’s “horror” movies. I’m not a fan of today’s mainstream horror movies. Films like Annabelle, Sinister, Insidious and the like don’t do much for me. I don’t find them scary and most of the time I’m laughing at them not with them. Wish Upon is a bit different and maybe that’s why it wasn’t a hit. It’s more like a Final Destination film than horror. It doesn’t rely on jumpscares or doors opening/closing or items being moved around. There are some kills, but not much gore. It’s more realistic scares than paranormal. It’s far from a great movie and I honestly don’t know if I can say it’s good, but it’s a lot more watchable than the other films that come with tags like “From a producer of Annabelle, From a producer of The Conjuring” etc. It takes itself a bit too seriously though. I think that’s the biggest issue. It has a lot of comedic relief in it, but it’s too serious for its own good. Joey King is good in the movie which finds her in possession of a mysterious music box that grants her wishes, but with grave consequences. I like King a lot as a young actress so maybe that’s why I didn’t mind this movie as much as others. There are also a lot of clichéd or unnecessary characters. Her friends are pretty stereotypical. There’s a gay character, Barb from Stranger Things is your typical sidekick along with her other friend who is more interested in her cell phone than real life. We’ve seen movies like this a thousand times before and it leads itself to having a sequel which I’m not sure it will get after not going gangbusters at the box office. I think tweens and teens might like it. 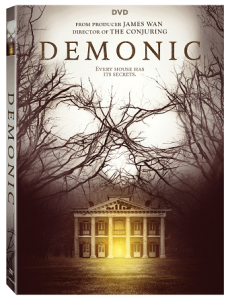 Next is Demonic which stars Maria Bello and Frank Grillo. It’s from producer James Wan and it centers on the aftermath of a horrific massacre where five college students were brutally murdered inside an abandoned home. Detective Mark Lewis (Frank Grillo) and psychologist Dr. Elizabeth Klein (Maria Bello) question one of the few survivors who explains they were amateur ghost-hunters, seeking out paranormal phenomenon at the abandoned house, which was believed to be haunted. But what started out as a harmless activity turned into something truly terrifying. I’m not usually a fan of paranormal films because I don’t believe in paranormal beings, but this was smart and didn’t use too much shaky cam which I loathe. Another big positive is that it’s also not found footage which again I loathe. It’s not overly original, but Grillo and Bello are two personal favorites who I always like. It also has a surprise ending which makes sense and overall works. It doesn’t try to do anything different, but also doesn’t outsmart itself which a lot of these movies tend to do. It’s nothing great, but if you like the cast and don’t mind these movies there are a lot worse out there.

Third is House by the Lake which stars James Callis and Anne Dudek. This was a real head scratcher. It starts out simple enough with a couple (Callis and Dudek) taking their autistic daughter to a family house by the lake. They bring along a nanny type character to keep an eye on their daughter and tend to her needs. The couple hopes this getaway will rekindle their relationship, but their daughter keeps wandering off and Dudek thinks Callis has an eye for the nanny. The girl goes missing, but is eventually found and then it gets weird for no reason. There is a creature that I didn’t see coming and I can honestly say I did not understand this movie. There is a complete shift in tone towards the end which didn’t fit the rest of the movie. It was realistic for 90% of the movie then it goes off the rails. I had no idea what to root for. There is a pedophile in the it and you think he’s the one the girl keeps wandering off to see, but nope it’s a creature that makes zero sense. I don’t get the point. 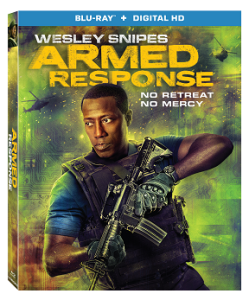 Fourth we have Armed Response which looks like a basic straight-to-video action movie, but it also has a supernatural theme to it. Wesley Snipes, Anne Heche and Seth Rollins of the WWE star in this film about a prison turned military compound that is taken over by A.I. or some sort of supernatural entity. The operative who designed the compound joins up with his former team to see what happened to other operatives who seemed to have died in the place. It has some good action and it wasn’t what I was expecting. It’s not great or anything, but I have soft spot for straight-to-video action movies especially ones that add a twist. The characters see ghosts and are haunted by past actions. I definitely wasn’t expecting the supernatural turn. Obviously you need to enjoy the genre to appreciate this film, but, if like me you do, check this out.

Last we have the Christmas themed releases. Murdoch Mysteries: Once Upon a Murdoch Christmas is first. Murdoch Mysteries is a show I like that reminds me a lot of Sherlock, but this new Christmas episode feels right out of Charles Dickens’s A Christmas Carol. A thief is robbing the ultra rich using special contraptions to steal expensive Christmas presents. The thief got the idea for his gadgets from Constable Crabtree’s graphic novel called Jumping Jack. Murdoch investigates the robbery of a train, items being stolen and returned to the same high-end store all while the thief stays one mechanical step ahead of him. It’s a classic “Whodunit”, but also has some funny comic references like Superman. The ending is very Dickensian with a bit of It’s a Wonderful Life. The ending may be a bit too sweet for my tastes, but it’s a Christmas episode so you kinda expect a happy ending. Fans of the show will enjoy it.

We also get Frasier Christmas Episodes. This is 8 holiday episodes from the critical and fan favorite. I grew up watching Frasier, but haven’t seen the show in years. I wasn’t sure how well it would hold up and it does quite nicely. The two standout episodes to me are Frasier Grinch and The Fight Before Christmas. I love holiday themed stuff that isn’t always happy happy joy joy so these worked for me. I forgot how much chemistry there was between the cast and I honestly want to rewatch the entire series now. Kesley Grammer has never been better.

A Very Brady Christmas is next. Most of us over 30 grew up watching The Brady Bunch at least in syndication. Sure the show is a bit laughable today, but it’s always a nice trip down memory lane when I rewatch stuff like this. Now this isn’t the Christmas episode we all think of (when Mrs. Brady loses her voice), this is the 1988 made for TV movie where Mike plans a vacation for Carol to Japan and Carol plans a vacation for Mike to Greece. They realize what they have done and instead decide to bring the kids (now all grown) home. They are considering selling the home and the kids and Alice are all dealing with their own issues. Mike learns a building he designed was built poorly and tries to save some men trapped in it. He gets trapped himself and they need a Brady miracle to save him. The original cast besides Susan Olsen returned to make this movie. If you haven’t seen it in years it’s worth rewatching it for the camp factor alone. 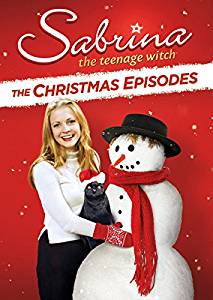 We also have Sabrina the Teenage Witch The Christmas Episodes. I never watched this show so these were all new to me. I’m not exactly the target audience for this show, but I think fans will like this collection. Sabrina takes on Mother Nature, steps in for Santa and deals with a sorcerer. This collection also has a bonus feature with the full Sabrina Goes to Rome which for some reason I had seen. I must have reviewed that on DVD before or watched it with my niece when she was younger.

Last we have The Honeymooners Christmas Laughter. This features the iconic episode ‘Twas The Night Before Christmas from season 1. It’s the classic Gift of the Magi scenario where Ralph pawns his bowling ball to buy Alice an expensive gift and Alice ends up buying Ralph a custom bowling ball bag. There are five bonus episodes, but honestly, the ‘Twas the Night Before Christmas episode is worth the purchase alone.