I felt like I took a trip back to the mid 1990’s today while exploring the lands within Battle Chasers: Nightwar. All those memories came flashing back as I was thrust into turn based combat, the action packed airship battles and as always, the cranky mage and “look out for number one” rogue. These concepts are of so synonymous with the 90’s that it could very well be considered trope-like in modern-day gaming, but Battle Chasers: Nightwar combines all these things in a way that makes it feel modern as well as classic. 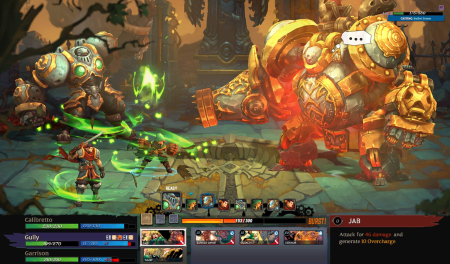 First, I want to talk about the characters. The characters are easily my favorite thing about this game. Gully, daughter of the former king who now wields his gauntlets of power. Garrison, a warrior who swore to protect the King and now protects his daughter. Calibretto, a fearsome and snarky War golem (who is my favorite character). Monika, the rogue whose true motivations can only be guessed at. And Knolan, a mage who thinks kids have it too easy these days and is probably the reason that Calibretto is as snarky as he is. These characters all have depth to them and relatable traits. When the story begins you see them act a bit cookie cutter, but each character is just establishing their own role. As the story begins to progress, you see that each character is incredibly human, save Calibretto, and that you can easily become emotionally invested in their quest and in them as characters. 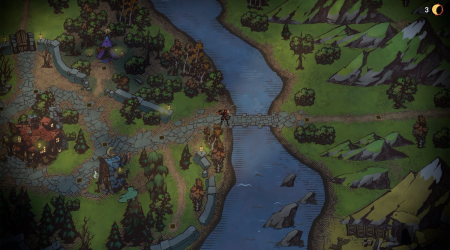 The art style for this game is an interesting choice and I think it pays off. While at first I was kinda put off by it, I found that as the game went on, certain things just look better this way and after having played a few hours, I really, really love the way this game looks and feels. Any kid from the 90’s will remember the RPGs where you walked on the map and fought bad guys as opposed to exploring a landscape and fighting them there. Battle Chasers really hit home the fact that they went the route of the classics because you will be walking on a map, enemies will be placed in your path and once you step near them, the battle screen takes over and you’re met with a very familiar sight if you were at all into early RPGs.

My biggest complaint is that while I love the voice acting, there are a lot of dialogue sequences where there’s no voiceover and it’s up to you to read what’s being said. For what there is, the voice actors did a phenomenal job for the work they did, I just wish they did more. It doesn’t impact the overall story or gameplay, I just wish that there was more of a good thing. Speaking of more good things, the soundtrack to this game is awesome and really helps build the atmosphere to the game. Overall this game is a must play if you ever played a RPG in the 90’s or if you just like RPGs in general.