On the heels of 2015’s Furious 7, one of the fastest movies to reach $1 billion worldwide in box-office history and the sixth-biggest global title of all time, comes the newest chapter in one of the most popular and enduring motion-picture serials of all time: The Fate of the Furious.

Now that Dom and Letty are on their honeymoon and Brian and Mia have retired from the game—and the rest of the crew has been exonerated—the globetrotting team has found a semblance of a normal life. But when a mysterious woman (Oscar® winner Charlize Theron) seduces Dom into the world of crime he can’t seem to escape and a betrayal of those closest to him, they will face trials that will test them as never before.

From the shores of Cuba and the streets of New York City to the icy plains off the arctic Barents Sea, our elite force will crisscross the globe to stop an anarchist from unleashing chaos on the world’s stage…and to bring home the man who made them a family. 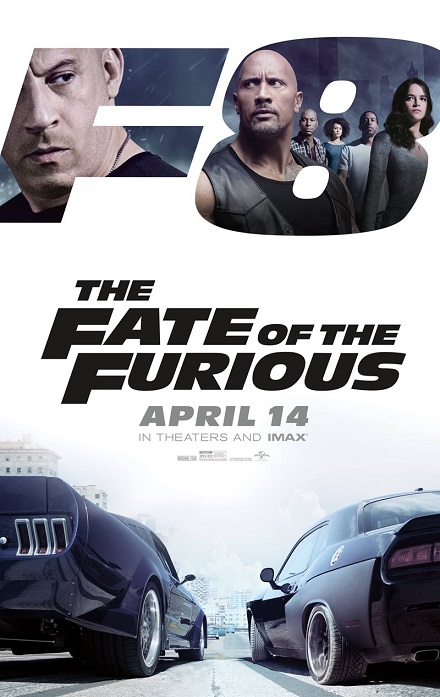 The Fate of the Furious is over the top, ridiculous and absolutely fun. You either love these movies or you don’t. If you do, you’ll be at the theater this weekend cheering and clapping like the rest of us. You’ll think you’re at the Olive Garden because this film is all about family.

The franchise may have started as a look at illegal street racing, but from Fast Five on and the inclusion of The Rock, some people may think they jumped the shark. There’s no shark in this one, but they do sort of jump a submarine.

The latest film finds Dom (Vin Diesel) being blackmailed by Charlize Theron to help her get an EMP, Nuke codes and a Russian submarine. She’s some master hacker that wants the governments of the world to kneel or something like that. Who cares? No one goes into these movies for the plot. We want certain things and let’s see if this one has them.

I love Dwayne Johnson. He is one of the most charismatic people in the world. I’ve met him a few times and he’s just a genuinely good guy. He shines in this. He’s allowed to crack jokes the entire movie usually at Scott Eastwood’s expense. He’s allowed to kick ass and actually throws an old school Rock Bottom (his WWE move) on one guy. There’s a prison scene with him and Jason Statham that is pretty nuts. Somehow he looks even bigger in this movie than his wrestling days.

These movies work because of the chemistry of the cast. Every movie seems to add another layer and this time around Statham gets more to do and we get Scott Eastwood as well. Statham does some of his best action sequences since his Crank and The Transporter days. If you’re a Statham fan like me, you’ll love him in this.

The film leaves the door open for follow up movies. I know they want to do a few more. I don’t know how they top a submarine in the next film, but for the tenth film there’s only one thing left, space. I’m calling it now. Fast Ten: Zero Gravity.

Let’s be honest, you already know if you are seeing The Fate of the Furious. I think it’s a ton of fun and haven’t had that much enjoyment at a movie since John Wick 2. It’s over the top ridiculous, but I don’t care. For a little over 2 hours I cheered, laughed, clapped and enjoyed life. There’s a scene where hundreds of cars crash into one another. Is it excessive? You’re damn right. Did I love it? Yes I did. Shut your mind off for 135 minutes, grab your popcorn and a large drink and experience a Hollywood Blockbuster at its truest form.