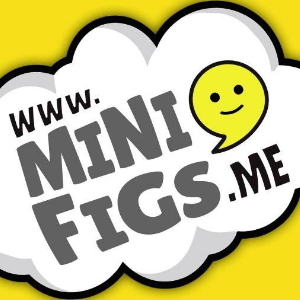 Minifigs.me is a site that based in the UK that offers custom minifigures. In reading the ABOUT entry on their page, you see their main focus is fighting the injustice of people not being represented as minifigs. In addition to offering services to have a personalized custom figure made of yourself (or your family, social circle etc, “any order size is fine”) they offer a range of pre-made customs of people from movies, games, music, and many other forms of media.

Horror Icons, Pokemon, Power Rangers, Comic Book Characters, and many other custom minifigures are on offer. Their Minifigs have even been to space (seriously)! 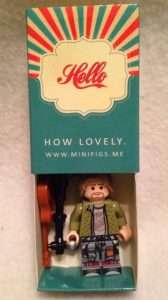 I was sent one of Minifig.Me’s Grunge Icon minifigures, modeled after Kurt Cobain. As a long time fan of Nirvana, and Grunge music in general, I was very excited to get to check this out. The minifigure packaging is interesting, I hadn’t seen packaging like this yet. I will admit, when I first opened the outer box this had shipped in, I was momentarily thrown off. I very quickly realized it was a matchbox-style packaging, and started laughing. I slid open the drawer, and instantly marveled at the figure it held.

Grunge Icon Kurt Cobain comes with a guitar and a microphone. I believe the hair piece he comes with a stock Lego piece, but is a perfect fit for this minifigure. The face is a good match for a minifigure version of Kurt Cobain.

The printing on this minifigure is very detailed. I love the texturing on his top, to make sure you know he is wearing his iconic sweater. I also love how they included a plaid flannel tied around his waist, which was a common part of the look for the whole Grunge scene.

The Grunge Icon’s whole outfit is well-detailed, and looks like the type of outfit Cobain used to wear. It actually reminds me of what Kurt Cobain wore for MTV’s Nirvana Unplugged set. The detailed printing carries around to the back of the figure, most importantly in the texturing for his sweater. My one, minor criticism for the figure would be that his pants might have a tiny bit too much detail. There is just so much going on with them. But I would rather that, than not having enough.

I greatly enjoyed the Grunge Icon minifigure from Minifigs.Me. The packaging, as well as the detailing on the figure itself, and even the accessories included are all great. If this is an example of their regular work, I’d love to see more of it. I highly recommend this for any fans of Kurt Cobain and Nirvana, as well as fans of grunge as a whole, and fans of Iconic Rock Musicians.

I was going to come up with a witty caption for this pic, but Nevermind.