Minifigures.com is a UK-Based site that offers great custom-printed minifigures for use with all of your Lego and Lego-Compatible sets. In their store they offer a great range of options, from Mr. Bean, to Vincent Vega, to The Don, and many more. From political figures, celebrities, and well-known chefs, to assorted characters from TV, movies, and video games. All of the minifigs are high quality, and custom-printed in detail, and come with matching accessories.

If you want a run of custom minifigures for an event, for promotional purposes, or even as an army-builder for your personal collection, they also offer the ability to design and order your own. They have a minimum order of 50 figures. BUT it is still a cool service to be offering.

I like everything Minifigures.com does, so far. BUT This review I was especially excited for! These ones are based on what is one of my top favorite movies, IF NOT my most favorite (which is a really tough competition).
I will be taking a look at Minifigures.com’s The Good, The Bad, and The Ugly minifigures. The figures are based on the titular characters from the movie of the same name. Specifically they are based on the characters as they appear at the end of the movie. They all come in the packaging from Minifigures.com that I love so much, it is resealable, allowing you to switch between playing with the figures (or using in a diorama) or displaying them in package on a shelf, without the normal internal debate on if you should open the packaging on a collectible or not. If you align the backing cards on these ones right, the scenery actually matches up, which is a really cool little feature, and will be great when displaying these minifigures.

The backs of the packaging have the bios I’ve come to expect from Minifigures.com. This time the bios just describe the characters, as they are in the film, without as many of the Lego-related puns or references that  I am used to.  Although when talking about the treasure the characters are after, they do refer to them as gold bricks, so they managed to kind of work one in. I would rather them do that, than have it feel to forced. The backs of the cards also have the same scenery as the front.

I will take a look at the individual minifigures, going in the order of their billing in the title. So, up first is “The Good”, The Man With No Name, or as Tuco calls him, “Blondie”, who was played by Clint Eastwood in the film. I am so glad they went with the looks the figures had at the end of the movie, because that means we get The Good with a poncho, which is my favorite look for this character, and has been really my favorite look for Eastwood from any of his movies, from a very young age. The printing on this figure (as well as the other two from this set), is very detailed, and is among the most detailed of the figures I’ve reviewed from Minifigures.com. From all the lines on his face, to all of the wrinkles on his vest, it looks amazing. 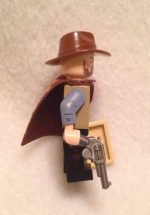 Aside from the Poncho, The Good also comes with a pistol, and a WANTED poster, featuring a picture of the minifigure of Tuco. The printing on him is great, as always. The detailing is really great. Look at the lines and wrinkles on the back of his vest.

Next up we have “The Bad” of the trio. Known as Angel Eyes in the film (or Sentenza for those that enjoy the original Italian version), and is played by Lee Van Cleef. Much like The Good figure, Angel Eyes is very detailed. His face has a lot of detail, but I really love the detailing on his outfit. I especially like that the chain for his pocket watch is even on here.

The Bad  comes with a pistol, and a printed gold coin. The printing on this figure’s back isn’t as detailed as The Good’s but I still think it is cool they took the time to print his back, just to get those little details in. 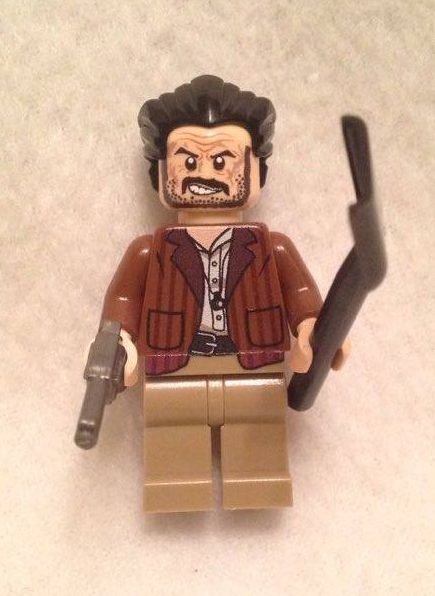 And last, but certainly not least, we have “The Ugly”. Tuco Ramirez (who is the only one of the three to have a full name), played by Eli Wallach is actually my favorite character from the movie. Clint Eastwood is great, and is the main character, but Tuco definitely made the movie for me, and he is well represented by Minifigures.com. That excellent detailing in his face and clothing is just great. They even gave him his necklace. I also love how he looks to be making that one kind of smirking face that Tuco makes a lot in the film.

The Ugly comes with a pistol, and a shovel for digging up the treasure. The printing carries the stripes of his jacket to his back. I love how they added the little detail of the rip in his jacket.

The Good, The Bad, and The Ugly triple pack (which I THINK may be the first triple pack) from Minifigures.com is fantastic. The detailing is very good, and the special artwork for the packaging for these three is great.   It is a must-own for any fans of Clint Eastwood, The Dollars Trilogy, or even fans of Westerns in general. I definitely highly recommend getting this triple pack! Yeah, you can order each of them individually, but why would you do that?

One thought on “Review: Minifigures.com’s The Good, The Bad and The Ugly Minifigures”