Minifigures.com is a UK-Based site that offers great custom-printed minifigures for use with all of your Lego and Lego-Compatible sets. In their store they offer a great range of options, from ET, to Bruce Lee, to Charlie Chaplin, to Freddie Mercury, to Mr. Bean, and many more. From political figures, celebrities, and well-known chefs, to assorted characters from TV, movies, and video games. All of the minifigs are high quality, and custom-printed in detail, and come with matching accessories.

If you want a run of custom minifigures for an event, for promotional purposes, or even as an army-builder for your personal collection, they also offer the ability to design and order your own. They have a minimum order of 50 figures. BUT it is still a cool service to have offered.

The Donald Trump minifigure comes in the resealable blister pack that all Minifigures.com custom minifigures come in. It allows you to have your cake and eat it too, as you can switch back and forth between displaying it in package or as part of a diorama.

Donald Trump’s blister pack comes with the typical bio on the back, as well as the info about the minifigure itself. I think this is a nice, and often humorous, touch that Minifigures.com includes with their minifigs. On this one, I particularly like the line “One thing’s for sure, the citizens of the United States Of Brickerica have never had a president like this before.

Donald Trump’s face has a slight orange tint to it, in an attempt to replicate his fake tan. Much like “The King” minifigure I had recently reviewed, The Donald comes with two faces, one of him kind of smirking, and one of his “mad” face. On top of his head sits a custom hair piece, designed to capture the look of Donald Trump’s real, custom hair piece. It is a nice attempt, and as I have mentioned before, I LOVE custom-molded parts. This one is quite humorous. 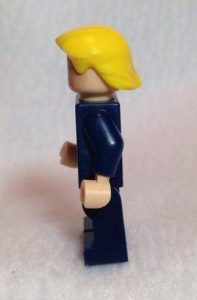 The print they used for the front of the suit is great, and I love the little detail of him even having a pin depicting the US Flag. However, this is the first Minifigures.com minifig that didn’t get a full 360 print on the body. It wouldn’t have really been necessary to do so, just something I felt was worth noting. The pictures right above give you good side views of the custom hairpiece used on Donald Trump, so you can better see it in all of its glory.

Love or hate the soon-to-be 45th US President Donald Trump, this minifig is well done. Minifigures.com has once again done a great job taking a public figure, and turning them into a citizen of Legoville. The minifigure looks great, and the custom hair piece is just fantastic.