Inspired by the true story of the oil rig explosion in the Gulf of Mexico that rocked the globe on April 20, 2010, comes this chronicle of the courage of those who worked on the Deepwater Horizon and the extreme moments of bravery and survival in the face of what would become one of the biggest man-made disasters in world history. 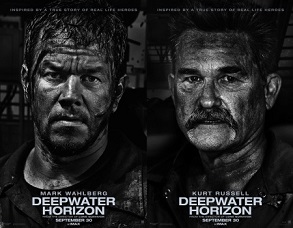 Deepwater Horizon is exactly what I expected it to be. It’s solid, but nothing groundbreaking.

I wanted to see it because I like the cast. I liked Mark Wahlberg’s last collaboration with Director Peter Berg (Lone Survivor) and I’ve been a Kurt Russell fan for decades. You really can’t go wrong with John Malkovich or Kate Hudson. I really only know Dylan O’Brien from the Mazerunner films, but I actually don’t mind those. I know of Gina Rodriguez, but I don’t watch her TV show so I wasn’t sure if she belonged in this type of film (she does).

The movie is about the 2010 BP oil fiasco on the Deepwater Horizon. Pressure test results were ignored which lead to explosions, deaths and one of the worst (if not the worst) oil spill in US history.

Going into it you expect an explosion, tension, BP looking bad, people being heroes. You get exactly that. The first half of the movie is the leads getting on the rig, dealing with BP execs and running tests. The veteran boss (Russell) doesn’t like the test results and neither does his crew. BP says it’s fine, go with it.

The second half is the rig spewing oil, getting destroyed and exploding. There’s fire, metal flying around, people rushing to escape, our leads helping others get out safely.

It reminded me a lot of The Finest Hours and made me wonder what Berg could have done with that movie. It’s a similar type of tension and build up. That movie relied more on a love story (which didn’t exist in real life) and although this does have a love story between Wahlberg and Hudson, it’s used properly as a reason for Wahlberg to get out of alive (along with a daughter).

Deepwater Horizon is coming out now because it’s not quite a summer blockbuster. It’s perfectly fine and I can see myself watching it again when it hits DVD months from now, but don’t expect too much from it. I wasn’t blown away by it which I was with Lone Survivor (a movie I’ve seen multiple times now). If you like the cast go see it though.