Academy Award® winners George Clooney and Julia Roberts reunite on the big screen as exes who find themselves on a shared mission to stop their lovestruck daughter from making the same mistake they once made. From Working Title, Smokehouse Pictures and Red Om Films, Ticket to Paradise is a romantic comedy about the sweet surprise of second chances. 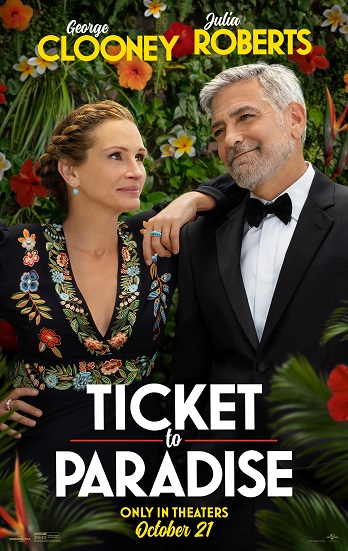 I’m not sure how many movies Julia Roberts and George Clooney have been in together, but their latest is Ticket to Paradise. It is a 100% By-the-Numbers rom-com that the over 50 crowd will love. It has all the classic romantic comedy tropes mixed with a bunch of good looking people in a beautiful location. It’s exactly what you expect it to be. If you go in thinking it looks cute, congrats, you’re right. If on the other hand you think it looks like cringe, congrats, you’re also right.

The pair play divorced parents of a 20 something year old woman. After graduating from college the daughter and her best friend take a trip where she falls in love with a local. Her parents fly out to hopefully prevent the wedding from happening. You watch Roberts and Clooney have to sit near each other on a plane! Sit near each other on a boat! Have hotel rooms next to each other! Will all this closeness rekindle some long lost feelings? What do you think?

At this point in their careers both actors can do these types of roles in their sleep. Clooney brings his good looks and charm to yet another leading romantic comedy role. Roberts is a working woman with a younger man who, you guessed it, Clooney doesn’t approve of. They don’t fit in with the family of their soon to be son-in-law and all their customs all while trying to sabotage their daughter’s relationship.

There are a couple of times I laughed, but it was more laughing at the film not with it. I definitely never want to see Roberts and Clooney dancing to House of Pain ever again. Old people dancing to 90s music is funny right? How old are they supposed to be anyways? College in the 90s makes them mid 50s at most, but their daughter is at tops mid 20s. Clooney in real life is 61 at this point. I know, I know, I’m putting way too much thought into this movie.

I didn’t get much out of Ticket to Paradise. It’s an absolutely harmless film I’ll forget about by year’s end. My sister will totally love it though. It’s a movie I call a “Book Club Film”, a movie a bunch of women in a book club (or wine club) will enjoy seeing together. If you’re over 50 you’ll dig it, but I can’t see the under 30 crowd going crazy over it.