Up first for us this week is Fall. I had heard good things about the movie despite the premise being absolutely ludicrous. How on Earth do two grown women end up on a tower in the sky trapped with no way down? Well the film actually explains it perfectly and it genuinely makes sense. I was kind of shocked at how thought out the film was despite sounding completely ridiculous. If you aren’t familiar with the surprise hit it’s about two women who climb a famous tower and get stuck 2000 feet in the air alone. The movie runs with its concept and creates a tense atmosphere that holds your attention and makes you feel the pressure and intensity. I quite liked it. The two leads fit their roles great each with a different personality that balances the other out. The one woman has a secret that I felt wasn’t necessary, but I understand needing to fill time and giving them something to talk about on the tower. I watched the Making Of segment and they actually filmed the two women on a tower 100 feet in the air and had them do most of the stunts and obstacles. I give them both a lot of credit and the filmmakers credit for really going for it. Is it great? No of course not, but it’s a heck of a lot of stupid fun and I’m 100% on board with that. Easily the best of the new releases for me this week.

Second we have Mack & Rita. I grew up in the 1980s, the heyday of body swapping films and this is the adult version of that genre. Elizabeth Lail (Netflix’s You) plays Mack and has always felt like an old soul. Her grandmother was a huge influence on her and she never quite felt like girls her age. When she enters a machine and is asked who she wants to be, she turns into an older version of herself played by Diane Keaton. Stuck in an old body, she adopts the name Rita and tells her best friend the situation. It’s all about aging tropes and young people vs. old people and growing as a person. There’s nothing wrong with the film, but I’m definitely not the target audience for it. My sister would enjoy it though. Keaton does her best and the old lady group is funny, but it’s not something I can see myself watching again. The younger friends are the shallow type, the older gals know nothing about social media. It’s full of that type of stuff that either makes you laugh or cringe. I roll my eyes, but again can see my sister laughing. I think you know whether or not the film is for you. 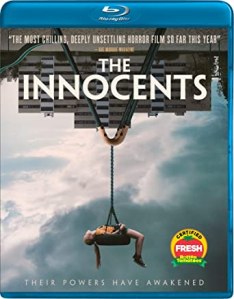 The Innocents is a film out of Norway that I was pleasantly surprised at. A family moves into a new apartment building and they have two daughters. One is Autistic, doesn’t speak and needs to be watched all the time. The younger daughter clearly wants more attention, but doesn’t get it because of her sister. She meets a young boy that lives there and he has a special ability. She meets a young girl who also has an ability as well. Her Autistic sister soon develops an ability, but the boy starts to get violent. The girls must bond together to stop him from getting worse. The young cast is very good and holds your attention throughout. I can see Hollywood remaking it because it’s a pretty universal story. I’m not familiar with anyone in it, but the story is intriguing and it doesn’t go crazy over the top like it could have. There’s no wild special effects like a comic book movie. It plays more dramatically than an X-Men type situation and it works because of it.

Next we have This is Going to Hurt Season One starring Ben Whishaw as a doctor at an obstetrics and gynecology ward. It is out of England and is a bit of a mix of House and Grey’s Anatomy. It has some graphic medical procedures that I was surprised by. Whishaw’s Dr. Adam Kay struggles with a delivery that could cost him a promotion, an engagement to his boyfriend is causing trouble, a younger doctor needs mentoring, and he must put up with repairs to the ward and everything in between. Whishaw is solid in the series, but I’m not a huge fan of talking to the camera. There’s times it happens a lot, there are times it barely happens so not sure why it’s there. It’s based on a memoir by the person who also writes for the show. I was quite surprised by a death in the series I didn’t see coming. The 7 episodes move quickly so I was able to binge it over two days. If you like medical procedurals you’ll probably like it because overall I did as well. 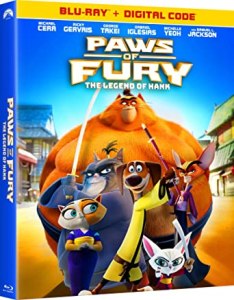 Paws of Fury: The Legend of Hank is out this week and it was pretty much a box office dud despite a solid voice cast including Michael Cera, Ricky Gervais, Mel Brooks, George Takei, Djimon Hounsou, Michelle Yeoh, and Samuel L. Jackson. Minions: The Rise of Gru made a ton of money, but Lightyear also bombed this year so it’s hard to judge why animated movies hit or miss right now. This film’s particular issue for me is that it feels like so many other movies. Kung Fu Panda comes to mind as does Blazing Saddles. Shockingly an animated family movie is loosely based on Blazing Saddles, a raunchy adult film from the 1970s. Kids won’t get that and it is a family safe film so don’t worry about needing to cancel it. I did think the film looked beautiful and it’s vivid and kids will love the characters and animation. I understand why it disappointed, but I can see it finding a bit more of an audience at home. I laughed a few times, but it definitely feels like other movies which are better. It leaves itself open to a sequel, but with the box office numbers not being there I’m not sure if it will continue unless it goes with lesser known voice actors and hits streaming.

The next batch of releases come from Mill Creek Entertainment. Up first is a Wal–Mart exclusive complete series That 70’s Show set. The series has been available as a complete collection before, but this has cool packaging in the style of the rock band KISS and is the definitive collection featuring all 200 episodes, remastered from the original High Definition Widescreen film negatives. Plus it has over 12 hours of bonus features. I watched the show when it aired and was a fan. I still enjoy the show today despite some issues others might have with it. One main cast member has gotten into trouble so people might have an issue watching it with him in it, but I still laugh. It captures a time of life that nowadays we only show full of drama. Sure Eric, Kelso, Jackie, Hyde, Fez and Donna had their issues, but it was more fun than dramatic. Plus Red and Kitty are the real MVPs of the show for me. I loved them. I also forgot how many different people had appeared in the series as guests or had short runs on the show. It was a hit show, but I also think it’s underrated. Friends, Seinfeld, The Office all get the love, but I’d put That 70s Show up there with them. It’s a show I know I’ll continue to binge throughout the years and this collection is great because it’s remastered and looks/sounds better than ever.

It hasn’t taken long for digital currency films to hit the market and the latest is Bitcon. It’s about a younger guy who just got out of jail trying to stay straight. He rents a storage unit to mine digital coins, but soon his old lifestyle comes calling. He gets involved with a crew who’s trying to sell stolen drugs for digital currency to convert it to cash. He’s a tech nerd so he handles the technical aspect, but the hard drive is stolen and they come looking for him. It’s a decent concept, but it already feels stale. The acting isn’t great and the biggest names in it are Jeremy Davies, Frank Whaley, and Tom Cavanagh all in supporting roles with Cavanagh a glorified cameo. A better cast and higher budget and it might have been really good, but alas it’s just another straight to video/streaming film the general movie going audience won’t know about. I’m not a fan of post-production muzzle flash and this is full of it. Good concept, not a great film.

The next five titles are all part of Mill Creek’s new Vintage Video DVD series. Their Retro VHS Blu-ray series is one of my favorites with retro style slipcovers and this Vintage Video is for DVD collectors. You get DVD movies with retro style slipcovers that look like videos you rented from the video store in the 1980s and 1990s. A lot of these have been reviewed as movies before so I’ll give a brief blurb about each, but the point of buying these releases is for the fantastic slipcover design.

King Ralph stars John Goodman as a Las Vegas lounge singer who inherits the throne of England after a freak accident. It’s the classic fish-out-of-water storyline with loud and large Ralph not fitting in with the more posh environment. Peter O’Toole co-stars and is the perfect foil. Goodman is fantastic in the role even if it feels a bit dated nowadays. I’m a huge Goodman fan and I’ve always had a soft spot for this film.

Renegades stars Kiefer Sutherland and Lou Diamond Phillips with Sutherland as an undercover cop who gets involved in a heist and LDP as a Native who thinks Sutherland is involved in a Native spear being stolen. They figure it out and team up to get back the stolen item. There’s a car chase that’s solid and the final shootout is decent as well and a lot of it is before CGI so it feels more authentic. Not a great film, but I guarantee it has fans.

Krull is a cult classis now, but they 100% thought they were making a legendary sci-fi film like Star Wars back then. I’ve always enjoyed it in the fun and campy way. It’s not good, not in the slightest, but it’s highly enjoyable if you like laughing at something and not with it. It has science fiction elements. It has medieval elements almost like a live-action He-Man & the Masters of the Universe. That slipcover is worth the price though. 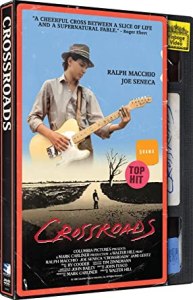 Crossroads stars Ralph Macchio as a guitar prodigy at Juilliard who isn’t interested in classical guitar after falling in love with the blues. He learns a blues legend is living in an old person home and after hounding him to teach him the blues, the two go on a road trip to the south where the Long Island boy can truly learn what makes the blues the blues. It’s based on the legend that Robert Johnson sold his soul at the crossroads. Macchio is good in it and guitar god Steve Vai also makes an appearance.

Last we have Hudson Hawk. It was a box office bomb for Bruce Willis, but has developed a cult following. It combines genres in a time when that wasn’t common. There is singing and music with slapstick comedy all while trying to be an action flick. Now with things like Deadpool being all over the map people enjoy the combination of genres, but back then audiences got confused at what it was trying to do. It has a solid cast and it has grown on me over the years for sure. If you watch it for the campiness and don’t expect Die Hard it’s a fun watch.