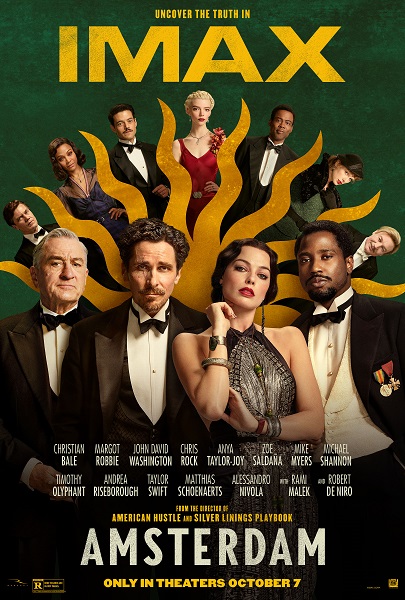 Amsterdam has multiple Oscar winners and nominees plus other big named stars in it. It’s directed by David O. Russell who has been nominated for multiple Oscars as well. It stars my favorite actor in the world Christian Bale who won an Oscar for Best Supporting Actor for The Fighter which Russell directed. So Amsterdam is amazing and I absolutely loved it right? Unfortunately no.

Amsterdam’s biggest issue is that it’s not as smart as it thinks it is. The story takes place between the First and Second World Wars with Bale and John David Washington as veterans of World War I who befriend Margot Robbie’s character. Bale has a back problem and a glass eye and is a doctor who likes to help other veterans. Washington is a lawyer and through flashbacks we learn of their time in Amsterdam with Robbie after their time in the War.

All that is fine and somewhat interesting. Bale acts his butt off and the story is at least believable at that point. But Bale and Washington get caught in a crazy whodunit when a woman is killed and they are believed to be the suspects. They need to track down help to clear their names and figure out who all is involved.

At this point it starts to go off the rails. It becomes a variable who’s who of Hollywood with Rami Malek, Anya-Taylor Joy, Robert De Niro, Michael Shannon, Mike Myers, Chris Rock and Zoe Saldana plus many others popping in and out of the story. It wants to be very smart and show how big business and big media tried to get involved with controlling the government and trying to be like Italy and Germany at that time. You know, the time of dictators and fascism leading to World War II. Did you know that heads of industry cared more about making money than they cared about the every day American? Wow shocking right? That’s sarcasm if you can’t tell.

I tend to like David O. Russell films. I love The Fighter, it’s one of my top 5 films of all-time. I liked Silver Linings Playbook. I liked Three Kings. I liked American Hustle which this film compares to the most. Unlike that film which received a ton of awards buzz, Amsterdam will not. Somehow with all the talent involved the movie just isn’t good. It’s too long and tries to be too creative. The cast is fine overall and the direction is fine, but the story is too hectic and convoluted to actually work. It’s trying to say something timely, but falls flat with cliched characters. It feels like the cast knew at some point it wasn’t going to work while filming. It has zero buzz and doesn’t seem to have any push behind it. There’s good reason for it, it just doesn’t work and it’s going to be DOA at the box office and during awards season.