Synopsis:
In acclaimed director Edgar Wright’s psychological thriller, Eloise, an aspiring fashion designer, is mysteriously able to enter the 1960s where she encounters a dazzling wannabe singer, Sandie. But the glamour is not all it appears to be and the dreams of the past start to crack and splinter into something far darker. 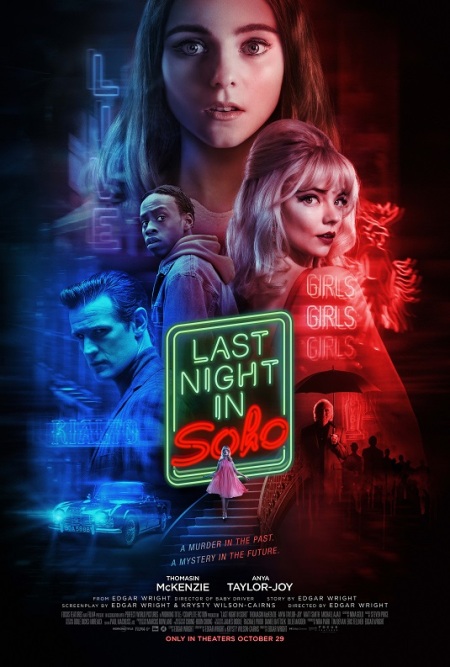 Usually when I hear someone describe a movie as “different” I think it’s not very good, but has something distinct about it or the person is afraid to say they didn’t like it. I’m going to sound hypocritical here, but I think “different” is the best word to describe Last Night in Soho. But I have reasons! I’ll explain.

I’m a huge fan of Edgar Wright. I think his Cornetto Trilogy (Shaun of the Dead, Hot Fuzz and The World’s End) are brilliant and some of the best comedies of the past 20 years. I really enjoy Baby Driver and have seen it multiples times. I’m not a fan of Scott Pilgrim, but that’s for personal reasons, not Edgar’s fault. Edgar Wright has a style about him with his camera work and use of music that make his movies very Edgar Wright-ish. Last Night in Soho is very different for him. Sure you can see traces of his film style and it uses amazing music, but the look and vibe of the film are different than anything he’s done before. The genre is very different from anything he’s done before. If you are like me and enjoy his films, once you see his latest, you’ll agree it’s quite different for him. And that’s not a bad thing.

It’s not a bad thing because it’s the coming out party for one Thomasin McKenzie. Like most people I first discovered her in Leave No Trace and over the past few years she’s added other quality roles to her resume, but this performance certainly earns her a spot at the big girls’ table. She is fantastic as the small town girl going to fashion school in London. She loves the 1960s, its fashion, its music and she’s out of place in modern London. Her roommate and classmates seem to mock her so she leaves the dorms and gets her own apartment that is more her style.

This is when the film takes a turn. It’s hinted at that McKenzie’s character Eloise “Ellie” Turner might have some sort of gift, but as she gets accustomed to her apartment, that gift makes her start seeing a young woman named Sandie (Anya-Taylor Joy) who came to London in the 1960s to be a singer. As Ellie becomes more obssesed with Sandie, she learns the hard truth about Sandie’s life, her career and what may have happened to her.

It’s these flashback type scenes where Wright really shines. It’s beautifully shot with both lead actresses intertwining with fashion and music and style. Wright clearly has passion for this era and it shows. The use of mirrors adds to the psychological element and McKenzie is mesmerizing. 1960s London pops with color and grime with beautiful women and nasty men. You question what is happening to Sandie, who is to blame and if Ellie can prove any of it 50 years later.

Then Wright flips the script in the third act taking a hard turn and changing everything you believe to be true. That’s what I liked most about the movie, it does keep you guessing. You believe one character is a different version of another all while another sits quietly to ambush you. I dug it.

If you are expecting a comedy ala Shaun of the Dead or Hot Fuzz, Last Night in Soho isn’t for you. If you want something that will have you thinking throughout and overall enjoy the end result then I definitely recommend it. It’s something I want to watch again to see what I might have missed the first time that would have made me guess right. Edgar Wright’s latest is extremely different for him and Thomasin McKenzie puts her name into leading lady conversations and because of that, it is…