Synopsis: An epic fantasy adventure based on the timeless Arthurian legend, The Green Knight tells the story of Sir Gawain (Dev Patel), King Arthur’s reckless and headstrong nephew, who embarks on a daring quest to confront the eponymous Green Knight, a gigantic emerald-skinned stranger and tester of men. Gawain contends with ghosts, giants, thieves, and schemers in what becomes a deeper journey to define his character and prove his worth in the eyes of his family and kingdom by facing the ultimate challenger. From visionary filmmaker David Lowery comes a fresh and bold spin on a classic tale from the knights of the round table. 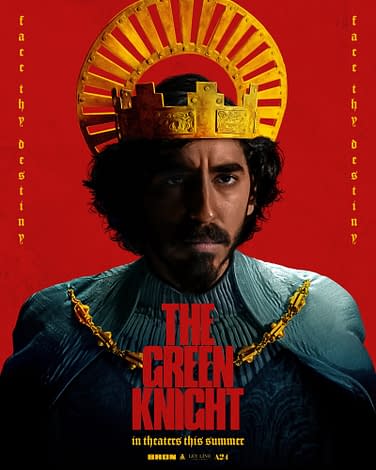 There will be two reactions to The Green Knight. Critics will praise it and call it visually stunning. The general movie going audience expecting Game of Thrones will hate it. It will have a high Rotten Tomatoes score and a very low audience grade. And the thing is, both are right.

The film is visually stunning. It’s epic and has great backdrops and costuming and everything you expect in a medieval fantasy film production. Dev Patel is very good in the lead and he holds your attention throughout. Alicia Vikander is good playing two different roles. Joel Edgerton is a bit underused with only a small role, but that’s because I’m a big fan of his. Basically it’s extremely well shot, well acted and looks like it’s supposed.

So what’s the problem? Not a whole lot actually happens. With a runtime over two hours, the general movie going audience will be looking for a cool battle or big action sequences. There really aren’t any. It’s more of an existential personal journey than it is a sword & sorcery flick. Patel’s character meets different people along his journey to meet The Green Knight, but those hoping for a film like Willow, Conan or Clash of the Titans will be disappointed. The non #FilmTwitter crowd should know what they are getting into before going to see it.

The Green Knight has some striking visuals especially the end sequence. Patel proves he’s every bit a leading man. The film itself is beautiful to look at. But if you aren’t familiar with David Lowery’s work, you will be expecting something much different. This is not an action movie. It’s not a sword & sorcery movie. It’s a thinking man’s reboot of a classic tale. Lowery fans will eat it up. If you watched Ain’t Them Bodies Saints or A Ghost Story and were totally confused/bored, this movie isn’t for you.