A Quiet Place – In the modern horror thriller A Quiet Place, a family of four must navigate their lives in silence after mysterious creatures that hunt by sound threaten their survival. If they hear you, they hunt you.

A Quiet Place Part II – Following the deadly events at home, the Abbott family (Emily Blunt, Millicent Simmonds, Noah Jupe) must now face the terrors of the outside world as they continue their fight for survival in silence. Forced to venture into the unknown, they quickly realize that the creatures that hunt by sound are not the only threats that lurk beyond the sand path. 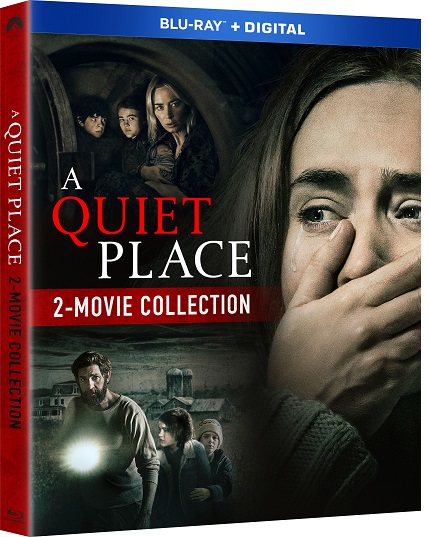 A Quiet Place was a monster hit in 2018. John Krasinski surprised a lot of people as a director and despite the lack of an open-ended ending, it made too much money not to get a sequel. A Quiet Place Part II was supposed to come out in 2020. Of course like everything last year it was postponed and it hit theaters in May 2021 helping to bring people back to the movie theater. John Krasisnki and real life wife Emily Blunt play husband and wife in the films with their children, one being deaf. Aliens invade Earth and the survivors must learn to adapt to their new lives making as little noise as possible. This features both films and if you are a fan, you’ll love having both movies available to watch back to back.

As for me, well there are things I like about the movies and things I don’t. The alien creatures are very cool, but do look like the demogorgons from Stranger Things. The concept of sound hunting is quite common in the animal kingdom and having a family who all know sign language because of a deaf child is a great twist to the sci-fi/horror genre. Being able to communicate without sound is just brilliant. The first movie has no spoken words for almost 40 minutes. It creates a tense atmosphere and adds to the film’s tone.

In both films they use a lot of tricks to survive. In the first movie they paint spots on the stairs and floor that make less noise when stepped on. They walk around barefoot and put sand out on paths to squash footstep noise. In the sequel Blunt uses oxygen tanks on her baby while hiding it so it doesn’t make noise. That’s smart.

What wasn’t smart was having a baby in this new world in the first place. That was one of my biggest complaints of the first film, how on Earth do you have a child in an environment like this? There are aliens who hunt by sound, let’s have a baby who cries nonstop. The first film also explains how loud noise can distract the aliens from knowing you’re there. There’s a scene at a waterfall that Krasinski explains to his son they can make all the noise they want because the waterfall will cover it up. So why not live there? Why not set up camp there and live your life a bit easier with a crying baby?

When they announced a sequel I was hoping they would make amends for the issues I had with the first one. Krasinski was returning to direct and I was hoping maybe he read some of the problems people had and would learn from them. At first with the sequel I thought he had. There is a cold opening which is a flashback to the first day of the alien attack. It’s fantastic. It sets the viewer in an idyllic, small town with a little league game going on. Krasinski’s character is running late and already missed a couple of innings. We are introduced to Cillian Murphy’s character and his family. Then the sky explodes, panic sets in and the town erupts into chaos showing what happened on day one of the alien takeover. Then it jumps into the current timeline, just a few days or so after the events of the first film.

Then the entire movie slows down like the first film as Blunt and her three kids set out into the unknown. They run into Murphy’s character which you expected and he wants them gone, but Blunt convinces him to help the deaf girl. The film splits into two parts with him and Millicent Simmonds looking for survivors and Blunt trying to find supplies like more oxygen tanks. The sequel uses sound and the lack of sound just as well as the original. Simmonds handles her scenes opposite Blunt and Murphy well and the aliens are developed more. If you liked the first film and haven’t seen the sequel yet you’ll enjoy it.

A Quiet Place 2-Movie Collection will be a hit for the fans. I wish I liked these movies more than I do. There are so many things they do right in the films that the things they do wrong are incredibly noticeable. But both films made a ton of money and it will turn into its own franchise universe. I probably will watch these movies again at some point, but I really wished I loved them like other people.