In The Tomorrow War, the world is stunned when a group of time travelers arrive from the year 2051 to deliver an urgent message: Thirty years in the future mankind is losing a global war against a deadly alien species. The only hope for survival is for soldiers and civilians from the present to be transported to the future and join the fight. Among those recruited is a high school teacher and family man Dan Forester (Chris Pratt).Determined to save the world for his daughter, Dan teams up with a brilliant scientist (Yvonne Strahovski) and his estranged father (J.K. Simmons) in a desperate quest to rewrite the fate of the past. 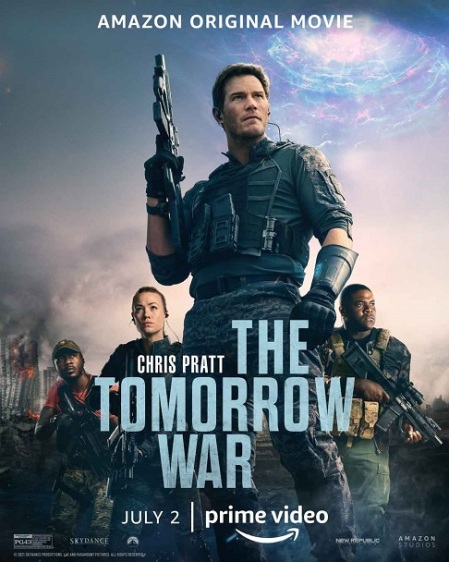 Overall I enjoyed The Tomorrow War. It has its flaws and it’s way too long, but overall I had fun with it. It has comedic sci-fi elements like Starship Troopers and Back to the Future and uses time like The Terminator franchise. With Chris Pratt as its lead you expect comedy and I definitely laughed at the bit when he’s in the future and asks if the Miami Dolphins ever win the Super Bowl and what the spread was. Marty McFly would have been proud.

The film takes place in today’s world, but time travelers from thirty years in the future come back to recruit people to fight a war against aliens happening in their era. Not everyone is able to fight, there are certain guidelines to follow and those make sense. Normal people from around the world are transported to the future to help stop the aliens.

Among them is Chris Pratt’s character. Along with plenty of other people, he is transported to 30 years into the future, but it goes wrong and he takes control of a ragtag group of people. Over coms he’s being told where to go and what to do by a colonel/scientist played by Yvonne Strahovski. She needs his help rescuing some researchers and what they were working on. Like everything else it goes wrong, but he’s able to get part of the job done. He meets up with Strahovkski to work on a bigger project before he is sent back to his time.

There is a pretty dramatic moment and you’re like wow, good ending, but then you realize there’s 40 minutes left. I was dumbfounded that was only the 2nd act and I think that’s the film’s biggest issue, it’s way too long. The third act sees Pratt, what’s left of the ragtag team and his father going to Russia to see if they can stop the threat from ever happening. It feels more like The Thing than a time travel movie and I get the point of it, but it also feels out of place. It’s The Tomorrow War, not The Today War. They end up getting the science completely wrong like Looper and Avengers: Endgame because of it though.

It may sound like I’m shredding The Tomorrow War, but I don’t mean to. I hate movie time travel though and it always bothers me when no one thinks it through right. But I did have fun with the film and do wish I saw it on the big screen. A movie like this deserves to be seen in a theater with a crowd, not at home on a laptop. I know it’s not cool to like Chris Pratt, but I’m a huge fan and he’s certainly easy to root for. You understand why he does what he does because it’s for good reasons. He’s a family man. He wants to help people. He goes back for people when he probably shouldn’t have. That’s what makes a good hero though. Sam Richardson is hilarious and would steal the film if it wasn’t for J. K. Simmons being all jacked. The man’s arms are huge in this. The Tomorrow War is something I’d watch again and if you like Pratt you’ll like it too. For me it’s definitely…

One thought on “Review: The Tomorrow War”