Academy Award® nominee Benedict Cumberbatch, Merab Ninidze and Primetime Emmy® winner Rachel Brosnahan star in this Cold Wat spy thriller based on the incredible true story of a British businessman who was recruited by MI6 to work with a Russian sleeper agent to transport top-secret information to put an end to the Cuban Missile Crisis. 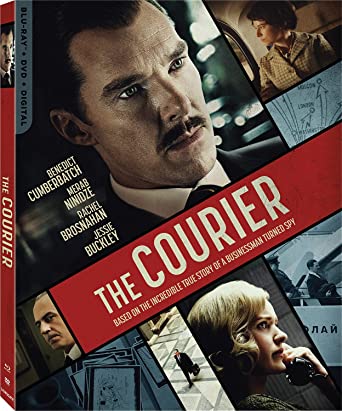 I was not familiar with the story in The Courier and I like watching films like this when I don’t know what’s going to happen. As an American, our historical films are usually about Americans and our point of view. In this, Benedict Cumberbatch plays Greville Wynne, a British businessman who gets convinced by the C.I.A. and MI6 to be a courier between them and a Soviet operative in the 1960s. What happens to him, his family, the Russian man was all new to me because I’m an American and didn’t know his story. If you grew up in the UK you might know about it or at least more about it than me.

At this point in time Cumberbatch has done enough spy dramas he could play this character in his sleep. That’s not a slight, as usual the Brit is fantastic in the role. He carries the film and brings an everyday man relatability to Greville. He’s a businessman, he knows nothing about being a spy, but that’s what they liked about him. He was an amateur, he flew under the radar and could travel in and out of Moscow without too many concerns because he did business in similar places. He doesn’t look the type, doesn’t act the type, he was the perfect ruse.

Merab Ninidze is also good as the Soviet Oleg Penkovsky. His chemistry with Cumberbatch reminded me of the similar back & forth with Tom Hanks and Mark Rylance in Bridge of Spies, a movie that if you liked, you’ll like this. Penkovsky is a proud Soviet who knows what he is doing is treason, but he does not think Khrushchev has a handle on everything. Penkovsky’s story is just as important to the film as Wynne’s. And again as an American, I did not know what to expect from the Soviet “traitor”.

The only real issue I have with the film is Rachel Brosnahan’s character. The actress is perfectly fine in the role, but her character is yet another composite character in a based on real life story. I hate when films add these characters that would not have existed in this time period. Brosnahan plays a C.I.A. agent who convinces Wynne to get involved along with an MI6 agent and is highly involved in all the espionage. Except she didn’t exist and the character was made up for no real reason. Well for Hollywood reasons. Brosnahan is a fantastic actress and handles the role with ease, but as I watched the film I could tell it wasn’t a real person and did some research after watching it to know for sure that her C.I.A. agent character was fake.

If you liked Bridge of Spies, The Imitation Game or Tinker Tailor Soldier Spy, you’ll like The Courier. Knowing nothing about the story certainly helped and a great performance from Cumberbatch helped as well. I have a feeling it’s going to slide under the radar for a lot of people because of odd releases due to the pandemic, but if you like spy thrillers and Cumberbatch then definitely check it out.