Up first for us this week is Deliver Us From Evil. It’s a pretty solid crime drama out of South Korea also involving Thailand. A former mercenary comes back into action when a young girl is kidnapped and her mother is killed. She’s taken to Thailand where he teams up with a transgender to help find the young girl. Unfortunately his past catches up with him as another man is out to get him for killing a family member. There is a lot of action which I like and the leads are all very good. It doesn’t end how you expect which is quite common with Asian films and why I like them over the conventional Hollywood happy ending. The violence is great. The story is pretty universal and it’s under 2 hours long so it gets right into it and holds your attention throughout. I quite enjoyed it.

Sticking with Asian films, next is Sheep Without a Shepherd. I was really digging this until the end completely ruined it for me. I won’t spoil it, but I was utterly dumbfounded at how they ended the movie. A young girl is raped and when she’s blackmailed by the boy, her and her mother accidentally kill him. The father helps cover it up and being a movie expert, he devises a plan for all involved so they won’t get caught using plot devices from movies he’s watched. The boy is the son of the police captain and her politician husband so there’s pressure to find out what happened. The father of the girl takes the family out of town, gets a hotel, sees a fight, rides the bus so there’s receipts to prove they weren’t around when the rapist boy died. It’s all very layered and fun and you hope they get away with it. The police are corrupt and arrest them, but the town rallies around them. You think it’s going in one direction, but then with about 10 minutes left, it takes a turn it shouldn’t have. Days later I’m still confused at the turn of events. There was a much better ending if they ended it 10 minutes sooner! 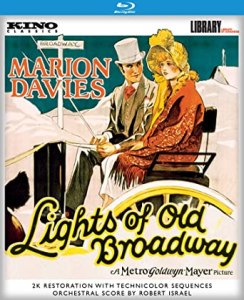 Lights of Old Broadway is a 1925 silent film about twin sisters separated at birth. One grow ups in a lavish family, the other a poor Irish family. The poorer sister falls for the brother of the socialite family and the film is about class struggle with families clashing over neighborhoods and power. The rich family comes from oil and gas and the poor family has stock in electricity which can change their fate as Broadway goes electric. Marion Davies plays the dual sister roles, but spends more time as the poorer Irish-American sister whether it’s on stage, dealing with her family or struggling to fit in at a socialite party. Historical figures like Teddy Roosevelt and Thomas Edison are characters in the film. It’s funny how these films are almost a 100 years old, but still seem relevant today showing class struggle and the difference in power and life because of wealth. 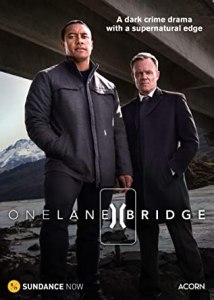 One Lane Bridge is a 6 episode series out of New Zealand. A Maori detective is new to the small town and doesn’t know much about the bridge and its odd features. A local is found dead under the bridge and at first is written off as a suicide, but soon an investigation is brought up to find his murderer. The bridge has weird paranormal tendencies with lots of history with deaths. The new detective struggles to fit in with the locals and has secrets of his own especially when around the bridge. At 6 episodes it’s a quick binge, I did it over two days, and it holds your attention as you try to figure out who is involved and how far it all connects. Not sure if it will continue because the storyline wraps up, but I’m sure they could do more with it. The scenery is breathtaking and it has all the oddball characters you expect like the alcoholic wife, the secret affair, the rich couple, the family not wanting to sell their farm, etc. Had no idea it would take a paranormal twist, but it jumps into it pretty quickly.

Next we have The Bureau: The Complete Series. This French/international show ran for around 50 episodes and is a pretty good spy drama. The first season wasn’t bad, but the show definitely picked up steam in season 2 with the following seasons being just as good. It involves France’s DGSE, Directorate-General for External Security, its principal external security service. It involves deep cover agents and the first season introduces Guillaume Debailly who returns to Paris after six years undercover in Damascus. He struggles to reconnect with his daughter, ex-wife and colleagues especially when a woman he was with in Syria, Nadia, comes to Paris as well. Season two continues that storyline and also brings in Marina Loiseau, an agent on her way to Tehran to keep an eye on Iran’s nuclear program. Guillaume is now running things and also working with the CIA. Season 3 starts with trying to rescue an agent, Malotru, and possible help with a Russian agent. Season 4 is about locating this agent now on the run and chased by multiple agencies. Season 5 is about leaked information within the agency and closing up storylines. I had never heard of the show before it came my way and fans of spy thrillers by Tom Clancy or John le Carre will definitely enjoy it. 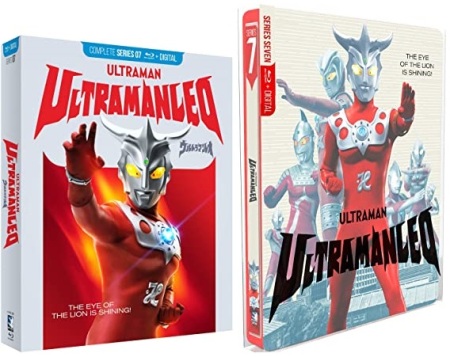 Utraman Leo: The Complete Series is out this week from Mill Creek Entertainment. It comes in a regular box set and as a Steelbook. From the mid-1970s, this is the style of Ultraman I grew up on and prefer. It’s super campy and ridiculous, but that’s what I like about it. Its official synopsis: The mighty hero Ultraseven is crippled while defending the Earth from an invasion by the tyrannical Alien Magma. He is rescued Gen Otori, a young Ultra warrior who had fled to Earth following the destruction of his homeworld, Planet L77 in the Leo constellation. Unable to return to his giant form, the injured Ultraseven resumes his human identity of Dan Moroboshi and trains Gen to become the next Ultra Hero… Ultraman Leo! Rewatching these old Ultraman series definitely reminds me of my childhood and why I like the older ones over the newer series. They are simply fun and are up there with the Kaiju films I watched as a kid too. Of the recent Mill Creek Ultraman releases, this is the best of the bunch for me. I had a lot of fun watching it and the Steelbook is really high-end.

Also from Mill Creek, Last Call To Normandy came out last week, but I didn’t get my copy until later. This 2-disc collection really brings to life D-Day and the celebrations that occurred 75 years later with men who were there. It uses archive footage and new footage from today to show the scope of the event and hear from men and their experiences. They get to use tanks, boats and planes that were used during the War to show viewers what it was like being there. It even travels around to show the paths troops took to get there. A really fascinating look and a must watch for today’s kids to see what these people lived through and fought for. Highly recommended.

Last we have Star Trek Lower Decks – Season One. This was released last week as well from CBS, but I didn’t receive my copy until after its release. Lower Decks is the first animated Star Trek series since the 1970s series Star Trek: The Animated Series. Set in the Star Trek universe in the year 2380, in which Earth is part of the multi-species United Federation of Planets, what differs this series from others, besides being animated, it’s about low ranking officers and crew members. You think of Star Trek you think of Captain Kirk or Captain Picard, but this is all about the lesser knowns. I really liked it. It’s funny and gets into stories you don’t see in the Star Trek Universe. The characters are quirky and imperfect and the jokes landed for me. And just because it’s animated doesn’t mean it’s for kids, it’s 100% a show for adult Trek fans. I’m glad to see there will be a second season.