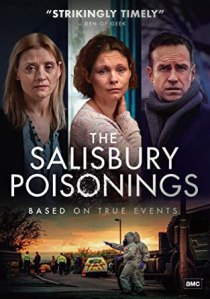 This week I’ll start with a TV offering hitting DVD, The Salisbury Poisonings. Based on true events, I was not aware of this situation in the slightest and I’m honestly embarrassed I hadn’t heard of it. The small town of Salisbury made worldwide news when a chemical terrorist attack poisoned a former Russian spy and his daughter. The town locked down to try to figure out what happened and to contain the chemical outbreak. A police officer was also a victim because he was the first to enter the Russian’s home. When you think it’s over with, a few months later a woman and her boyfriend are poisoned as well when the original container that housed the poison was found by them. This series starts with the poisoning and dives right into the investigation, the medical response and containment. It was extremely interesting and again, I’m shocked I didn’t know about it. That may have helped me enjoy it more because not knowing who would die, what would happen and how long it went on for keeps you guessing. Solid drama. 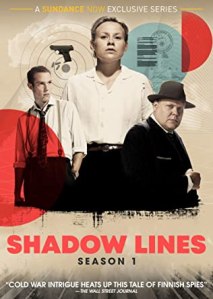 Second we have Shadow Lines. Season 1. As an American it’s always weird seeing stories from another point of view. This series is about 1950s Finland and espionage during the Cold War. Helsinki played a major role in the Cold War being a neutral area between spy agencies in the East and West. They also had their own agency and the series is about a young college student getting involved and becoming a spy herself. The lead actress is great and the story was all new to me. I honestly had no idea Finland was involved in any of this and that the Soviet Union tried to set up a base there and that Finland gathered their own intelligence in order to fight and keep their own independence. The set design and costuming are great for the era and really gives it a sort of noir-ish vibe. Not knowing anything about it, like The Salisbury Poisonings, probably added to my enjoyment and kept me guessing. If you like spy thrillers that really get into details like hidden recording devices and microfilm in tampons, this is for you. 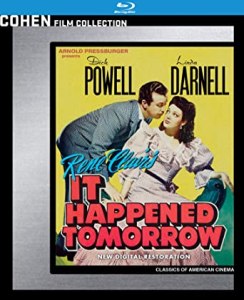 It Happened Tomorrow is a 1944 flick where a newspaper reporter is given a newspaper that tells him the events of the following day. He immediately loves this ability, able to get a scoop on a robbery, but then the police get involved thinking he knew too much about it that he had to be involved. He gets tied up with a fortune teller who he believes can help him prove he wasn’t involved with any of it. He hits the horse track to win some money for him and his new dame, but when he gets the headline he’s going to be shot and killed, he does his best to try to figure out a way of escaping his own fate. I really enjoyed this. I’m always surprised at movies that are 70-80 years old and have storylines that make sense today. I’m sure it’s been remade in some way, even a movie like Click comes to mind, but I definitely recommend this original film. Really good.

2149: The Aftermath is a post-apocalyptic sci-fi film about a boy who lives in a pod alone, working online, living online playing games with no real existence. He doesn’t want to go out because he believes the air is deadly and is convinced the pod is his only way to live until a lightning strike shuts his pod down and he goes out into the world he hasn’t seen in almost 10 years. He meets a girl and her dog and she brings him to her family to help him survive outside. As he learns the truth about the pods, his mother and the world, he falls for the girl. It’s not groundbreaking sci-fi, but for something I had never heard of, it’s good for a watch. Molly Parker is probably the biggest name in it and the boy and girl lead have good chemistry together even though you know they will get together. If you only watch mainstream blockbusters this isn’t for you, but if you like indie sci-fi, you might like it.

Speaking of not for me, Peace Piece is a documentary starring Mandy Kahn and her poetry. I have no idea who she is and nothing about this did anything for me. I did like some of the scenery, but I feel bad even watching this because it’s not something I’d ever be interested in. She wrote a poem where she says I’ll lay down my weapon first and wants audience members to stand up and say it too to see how many people will say it in a minute. There is also a performance piece in it with actors and people doing performance art to her writing. If you know who she is, it’s for you. If you like poetry and performance art, it’s for you. It simply wasn’t for me.

Next we have Nina Wu. The film is about a struggling actress who gets cast in a movie that could be her breakthrough. There is nudity and a sex scene and she’s not thrilled about all that, but takes the job. The director is brutal to her and pushes her beyond her limits. But at the same time she’s seeing things or having memories and you think it’s a psychological thriller. I won’t spoil it, but it definitely didn’t go where I expected. There’s another woman she keeps seeing that you aren’t sure if she’s real or not. It’s well made and the lead actress is great and it gets lots of originality points, but I also can’t tell you if I 100% understood it. The ending makes sense, but with the visions and what not, I think put more into them than what they meant. 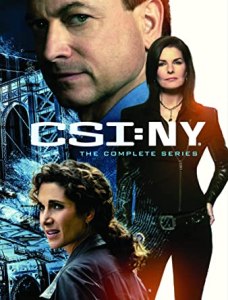 CSI: NY: The Complete Series is out this week. A spinoff of CSI: Miami which was a spinoff of CSI, the show ran for 9 seasons starring Gary Sinise, Melina Kanakaredes, Eddie Cahill, Carmine Giovinazzo, Sela Ward and others. I liked it more than Miami but the original Vegas show was always my favorite. Sinise is a great actor and might be the best actor out of all the CSI shows and he carried the show to me. This box set is a monster with every episode for you to binge through. I’m not sure if the complete series has been available as one set before, but fans will surely enjoy this. It was nominated for multiple Emmy Awards and had some fantastic actors including guest stars over its run.

Last for this week’s releases is Beverly Hills 90210: The Ultimate Collection. This is a 74-disc collection featuring the entire original series as well as the debut season of the 90210 reboot. I’ll be honest, I watched Beverly Hills 90210 growing up. It hit my teen years and I watched it weekly like most people my age. It was groundbreaking at the time, but would be considered tame in today’s world compared to Riverdale and reality TV. The show made stars out of Luke Perry, Shannen Doherty, Jennie Garth, Brian Austin Green, Tori Spelling and Jason Priestly and was an instant hit thanks to Aaron Spelling. Sure as it progressed it got more ridiculous especially as they got older, but who didn’t chant Donna Martin Graduates! or listen to listen to Kelly talk about a sexual assault or grow sideburns like Dylan and Brandon? We all did. If you were a fan like me, this is a beast of a collection like CSI: NY: The Complete Series. With almost 300 episodes it’s a marathon binge but I believe in you! Plus it has tons of bonus features including featurettes, behind-the-scenes, a reunion and more. Fans will eat this up.

The next few releases came out earlier in the month, but I didn’t get my copies until a few days ago. These come from Mill Creek Entertainment.

First is MacGruber which got a Blu-ray & DVD release. Based on Will Forte’s Saturday Night Live character MacGruber, which itself was a parody of MacGyver, the film was a dud at the box office in 2010 but grew a cult following as Forte got more popular as did Kristen Wiig. Is it a good movie? Oh god no, but it’s also kind of so-bad-it’s-good. There are scenes that are laugh out loud funny, but others that are cringe worthy. I hadn’t seen it in years so I immediately popped it in the day I got it. It’s still bad, but also funny at the same time. Val Kilmer plays the bad guy Dieter Von Cunth and after his team is blown up accidently, MacGruber must join forces with Ryan Phillippe, a by-the-book military type and Wiig to take down Von Cunth once and for all. It is bad, but the infamous sex scenes will have you laughing along with the MacGyver spoofing. It does have a huge cult following so fans will enjoy these new releases. 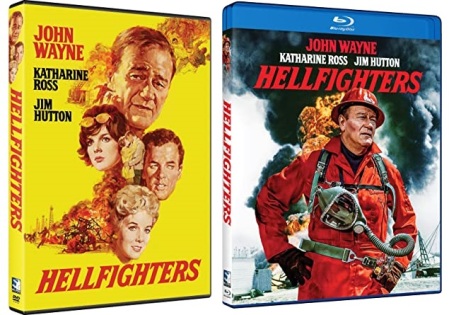 John Wayne’s Hellfighters also got a DVD and Blu-ray release. Wayne plays Chance Buckman, a colorful Texan who tames out-of-control infernos in exotic locations around the world. When an accident sends him to the hospital, his estranged daughter is brought in. She soon wants to know more about the business and the fires and falls for his younger assistant. Think of it as Armageddon, but around oil refineries and not in space. I had never seen it, but John Wayne is great as is Jim Hutton who plays the younger assistant/son-in-law. It’s got action, a love story, fighting, classic John Wayne one-liners. If you are a Wayne fan, add this to your collection.

Last we have Scars of War – 4 Vietnam Stories. Casualties of War is the biggest film in it starring Michael J. Fox and Sean Penn. Brian De Palma directed this film about 4 soldiers raping a Vietnamese girl and the fifth soldier becoming an outcast because he wants justice for the girl. Fox is the hero you root for with Penn being the guy you want to hate. I hadn’t seen it in years and it’s still pretty powerful. Birdy stars Nicolas Cage and Matthew Modine. One comes back from Vietnam requiring facial surgeries, the other comes back more mentally unstable wanting to be a bird in flight. The one friend visits the other at the hospital hoping he can help his friend. I actually hadn’t seen this before. Alamo Bay stars Ed Harris as a Vietnam vet who sees his livelihood being taken from him in Texas as immigrants move into his fishing town. It’s based on true stories, but the town is fictional. Harris is always good even in one of his earlier leading roles. Summertree stars Michael Douglas as a musician who gets drafted into the Vietnam War but flees to Canada as his music career is starting to build. This came out in 1971 so it was extremely timely at its release. Of the four, Casualties of War still holds up the best, but I enjoyed Ed Harris’ performance as well.