Not a lot for us again this week so I’ll start with the best of what we got, The Hot Spot. This 1990 film directed by the late, great Dennis Hopper sees Don Johnson roll into a small town and gets a job as a car salesman. Jennifer Connelly is the young receptionist with Virginia Madsen as the wife of the car dealership owner. Johnson is a crook who starts a fire in order to rob a bank, but others have secrets of their own. Connelly is being blackmailed over some pictures and Madsen might be a bit of a crook herself. I had never seen it and I liked it. It’s a bit of a noir-ish, somewhat new Western kind of like Hell or High Water. This new release is a 2K Remaster that comes with interviews with Virginia Madsen and William Sadler plus commentary. If you are a fan of the film, it looks and sounds great in this new Blu-ray. 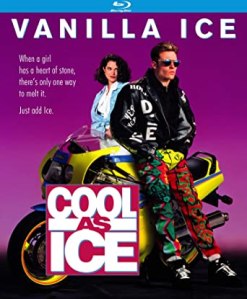 Sticking with a rolling into a small town theme, next is Cool As Ice, yes the 1991 Vanilla Ice movie. I hadn’t seen the film since probably 1991 and I gotta say, it’s not good. It wasn’t good then and it’s even more cheesy and dated now. But let’s be honest, you expect that when you pop in today. Vanilla Ice plays a rapper who along with his posse rolls into a small town and get stuck there while one of their motorcycles gets repaired. Of course Ice falls for a local girl and clashes with the people around her. But plot twist, her dad has a secret of his own and when he’s seen on TV with his daughter, some people from his past come a calling and Ice is there to save the day! It’s an absolute hot mess, but you almost HAVE to watch it to believe it. The clothing is horrific although Ice’s Stussy eight ball t-shirt is kind of back in style now. It opens and closers with Ice rapping and this new Blu-ray comes with commentary. 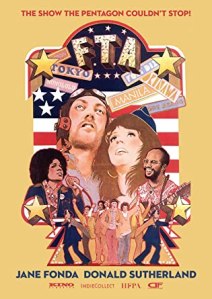 Third we have F.T.A. a documentary starring Jane Fonda and Donald Sutherland. This anti-Vietnam documentary from 1971 had been out of circulation until this new remastered release. Your enjoyment of the film will depend on whether or not you like Fonda’s political agenda. If you’ve always supported Hanoi Jane, you’ll love it. If you lean the other way, you won’t. It’s pretty much that cut and dry. Fonda, Sutherland and others traveled through Southeast Asia doing an anti-war comedy tour meeting soldiers and people who were also against the war especially soldiers who didn’t want to be there. It gets very political and discusses race and how the U.S. shouldn’t be there, etc. Again clearly for those who agree with Fonda. There is an introduction with Fonda and interview as well.

The Wages of Sin is the latest in the Forbidden Fruit: The Golden Age of the Exploitation Picture collection. This is volume 10 of the series. This 1966 film takes European movies and re-edits them into an abortion grindhouse type of film. If you want to see live births, doctors talking about birth control. how abortions can kill you and everything in between, this is for you. It’s kind of funny with what they did and how it was cut together to make this new over-the-top film. I wasn’t familiar with it before and found myself chuckling at the disaster that it is. It’s intentionally this way to be shocking to unsuspecting viewers. It definitely fits the Forbidden Fruit collection. It comes with commentary and other bonus features.

Last we have A Ghost Waits. This black & white indie film sees a guy hired to clean out and repair an apartment whose tenants just up and left so it can be rented out again. After a weird night he soon realizes there is a ghost there that is driving everyone out. But he starts to fall for the ghost and she falls for him as well which causes issues with her boss who sends in another ghost to get the job done. The pair team up to get the new ghost gone and soon realize they need to be together forever. It’s an odd movie and very much an independent film with its single location setting, actors you aren’t familiar with and songs you may not know either. I enjoyed it and appreciate it bringing something new to the table. This release is filled with bonus features including multiple commentaries, interviews and more.