Universal Pictures announced today that to celebrate the arrival of F9, the newest chapter in the Fast and Furious Saga, in theaters June 25, the studio and its theater partners across the U.S. will launch a free nationwide screening series of all eight previous Fast films, beginning April 30, 2021. 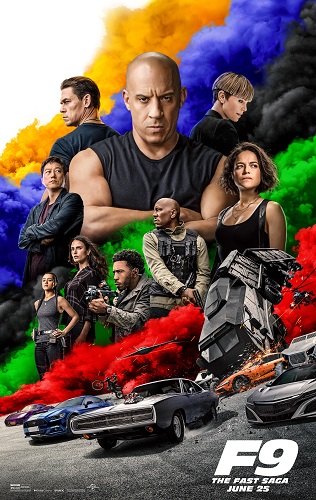 The eight-week program will invite fans to watch all eight previous Fast films in participating theaters, free of charge, with one film screening each Friday. The films will be screened in chronological order, beginning with 2001’s The Fast and the Furious on April 30 and culminating with 2017’s The Fate of the Furious on June 18.

Over the course of eight films that have stoked passion in an ever-expanding audience and have earned more than $5 billion at the worldwide box office, Universal Pictures’ record-smashing, homegrown Fast Saga has become the studio’s most-profitable and longest-running franchise. Across social media platforms, the fan following for the movies and cast has grown into the biggest of any active franchise. On the heels of 2017’s The Fate of the Furious, which debuted in theaters as the biggest global opening of all time, the blockbuster franchise has expanded to a multitude of offerings – from toys and video games to an all-new animated series and a successfully launched spin-off franchise.

“The Fast films are all about family, and Universal wanted to find a way to thank our huge family of Fast fans around the country for their passion and loyalty over the past 20 years,” said Jim Orr, Universal’s President of Domestic Theatrical Distribution. “We’re grateful to our theater partners for their help in making this screening series possible and we are delighted to welcome audiences back to theaters to experience the wild Fast ride all over again. And we cannot wait to blow everyone’s minds with the release of F9 on June 25.”

Screening tickets will be distributed by each individual theater and will be available the Friday before each weekly screening, starting on Friday, April 30.

Visit www.FastFridayScreenings.com for further information on how to receive tickets.

The full schedule of screenings is as follows:

In addition to the screening series, Entertainment Weekly’s popular BINGE Podcast will take fans through each of the previous Fast films in an eight-week series featuring exclusive conversations with the stars who brought those movies to life. Each episode will focus on one movie in the franchise with a Fast cast member from that particular film. Beginning April 30, a new episode will drop each “Fast Friday,” every week, leading up to the release of F9 on June 25.

No matter how fast you are, no one outruns their past.

F9 is the ninth chapter in the Fast & Furious Saga, which has endured for two decades and has earned more than $5 billion around the world.

Vin Diesel’s Dom Toretto is leading a quiet life off the grid with Letty and his son, little Brian, but they know that danger always lurks just over their peaceful horizon. This time, that threat will force Dom to confront the sins of his past if he’s going to save those he loves most. His crew joins together to stop a world-shattering plot led by the most skilled assassin and high-performance driver they’ve ever encountered: a man who also happens to be Dom’s forsaken brother, Jakob (John Cena, the upcoming The Suicide Squad).

F9 sees the return of Justin Lin as director, who helmed the third, fourth, fifth and sixth chapters of the series when it transformed into a global blockbuster. The action hurtles around the globe—from London to Tokyo, from Central America to Edinburgh, and from a secret bunker in Azerbaijan to the teeming streets of Tbilisi. Along the way, old friends will be resurrected, old foes will return, history will be rewritten, and the true meaning of family will be tested like never before.