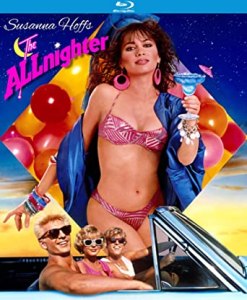 I haven’t gotten my copy of the biggest release of the week yet so I’ll jump into what I did receive. Up first is The Allnighter. This 1987 college comedy stars Susanna Hoffs (of The Bangles fame) as a young woman who spent her college career learning and being a good student and never found true love. She decides with only one night left of her college life, she has one last ditch effort to find Mr. Right with help from her roommates Joan Cusack and Dedee Pfeiffer. There are two surf bros, a famous musician, the roommate has an overbearing fiancé and lots of 80s clothes and music. I’m sure it has some diehard fans out there because of Hoffs, but I will be honest, I had never even heard of it. The cult fans will say it’s better than Bachelor Party or Porky’s, but I’d disagree. It hasn’t aged well and I didn’t get much out of it. I’m sure fans of the film will eat up this new Blu-ray though which comes with commentary from Hoffs and the co-writer/director of the film (her mom) among other bonus features.

Sticking with the 1980s, 1984’s Hard to Hold starring Rick Springfield also gets a Blu-ray this week. Springfield plays a rock singer who gets into a car accident after escaping from a concert. He instantly falls for the woman he hits, but she has no interest in the famous musician. Of course she eventually caves and his new relationship causes issues with the band recording a new album. It’s not very good, but it does get a bit steamy at times and also stars a younger Gregory Itzin as the record producer. Springfield performs a bunch of songs and wrote a bunch for the soundtrack as well. Like The Allnighter, probably a film with some diehard fans while others completely forgot about it.

Port of Freedom is a 1944 German film which shockingly has nothing to do with Nazis, Hitler or any kind of German propaganda. It’s a love story really. Hannes is a former sailor who now plays the accordion and entertains crowds at a place in Hamburg. Two sailor friends come to port and hang out with Hannes. While being with them, his brother dies and he takes on the responsibility of his brother’s lady friend, a young farmgirl. He falls for her, but this world is all new to her and although she likes his advances, she’s also courted by another man which makes Hannes have to decide between love and the ocean. The fact that this got made during World War II is astonishing. I didn’t realize it while watching it and learning that fact really opened my eyes. The narrative of the film is simply about people, not war, not German power, just people, working, falling in love having a good time. Hans Albers was Germany’s biggest star at the time and really comes across as leading man material. I had never seen the film before but respect what it accomplished for the time period.

Shogun’s Joy of Torture is a 1968 Japanese anthology film telling three tales of torture based on real life events. The first story is about a brother and sister who end up in a taboo relationship. He gets injured in a work accident and his medical debts need to get paid one way or the other. When she’s not willing to do what’s asked of her, their relationship is found out. The second story is another taboo relationship between a nun and monk. The third story involves a tattoo artist whose latest work on the back of a woman is applauded by all but one man who claims it doesn’t show anguish and pain authentically. The tattoo artist watches the man and others torture European women who had come to spread Christianity. This is probably the most graphic of the three stories with lots of nudity and torture. This new Blu-ray comes with commentary, interviews and more.

The Belles of St. Trinian’s also gets a new Blu-ray this week. Alastair Sim plays a dual role of Millicent Fritton and Clarence Fritton in a film about schoolgirls getting into trouble. The Sultan of Makyad sends his daughter to school in England where he has racehorses. The school needs money badly so Sim (as Clarence) convinces his sister (also Sim) to re-enlist his expelled daughter to befriend the Sultan’s daughter to get inside information on a horse. Every bit of the movie is about some scam whether the girls are making gin, bookmaking or ultimately trying to kidnap the horse. It spawned multiple sequels and Sim fans will enjoy this release that comes with multiple interviews and a featurette. 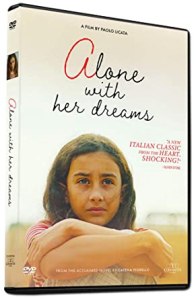 Set in the late 1960s, Alone With Her Dreams tells the story of a young Italian girl who is forced to live with her grandmother in a small town while her parents leave to find work in France with her younger brother. Despite the village having other family members, the young girl is told she can’t associate with them, but isn’t given a reason why until her uncle tells her. What he says isn’t exactly the truth and her grandmother only wants to protect her without giving away an awful family secret. The young actress is great in the role, but I did guess what was going to happen. The setting adds to the storyline and tension since everything is so close together. Despite being set in the 1960s it’s still a timely story in today’s climate. 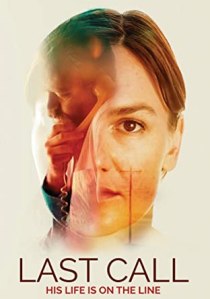 Last Call gets a ton of originality points using a simple story while showcasing some cool filmmaking techniques. The movie is split screen. Sometimes it’s vertical, sometimes horizontal. If you play 2 player video games you are probably used to screens like this. I’m not sure if I loved it being the entire movie, but kudos for trying something relatively new. It also uses single takes. From its press release: The entire movie is comprised of two single-take shots, merged together and without cuts as the film plays out with two camera crews in different parts of a city as we follow each character through their happenstance encounter. You have one male character who has been drinking and thinks he calls a helpline. The other is female, a single mom who works as a janitor. She accidentally takes his call thinking it’s a call she’s been waiting for and over the course of the film tries to talk him off the ledge in a way. One split is his point of view starting at a bar then following him to his apartment where he makes his call. The other split is her point of view showing her entering her work and taking his call and trying to clean and get in touch with her son while dealing with him. So even though the story of a suicidal man is pretty common, the visual narrative is very original. The two leads are pretty strong as well. If you are looking for something different then I recommend it.

Last we have two television releases. First is Betty White’s Pet Set: The Complete Series. In 1971 the national treasure that is Betty White created and hosted The Pet Set for 30+ episodes. Celebrities would show off their pets and it also included exotic animals from Ralph Helfer and talked about taking care of animals and animal preservation. You get top-notch celebrities of the day like Burt Reynolds, Doris Day, Mary Tyler Moore, Vincent Price, Barbara Eden, Eva Garbor, Jim Nabors, Andy Williams and more. Zamba the lion was probably the breakthrough animal star of the show. The series has been unseen for decades and this is a fun collection. Betty White is still very much an icon and her fans will love this. I didn’t even know this show existed and I had a blast with it watching Betty White and huge named celebrities showing their human sides. Pretty neat collection.

Last we have Inside Amy Schumer: The Complete Series. Inside Amy Schumer ran from 2013-2016 on Comedy Central making Schumer a household name after years of doing stand-up. It won 3 Emmys including Outstanding Variety Sketch Series and mixed sketches with some of her stand-up and on the street interviews. Critics seemed to love it and it helped launch her movie career. Are there funny bits in it? Sure, there are some sketches that are funny. Are there sketches stolen from Saturday Night Live, MadTV, Key & Peele and every other sketch series previously? You better believe it. I liked Schumer’s early stand-up. Well I’ll say her earlier stuff is funnier than when she got more famous. I didn’t love this show, but it did make me laugh on occasion. It did have a big following at one point and I believe this is the first time it’s available as one complete collection and not individual seasons. So if you are/were a fan of the series or Schumer, you’ll like this.