Out this week is Mill Creek Entertainment’s latest batch of their Retro-VHS Edition Blu-rays. If you aren’t familiar with this fantastic line, these are Blu-rays of older films with retro designed slipcovers that make them look like VHS tapes you’d see for rent at your local video store in the 1980s and 1990s. They are super fun collectibles. 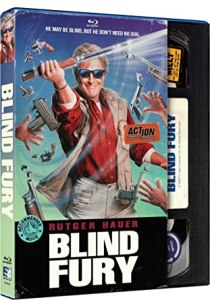 Up first is Blind Fury from 1989. Rutger Hauer plays a Vietnam Vet who ends up blind, trains overseas and becomes a badass swordsman. Twenty years later he returns to the U.S. where a friend (Terry O’Quinn) is in trouble. After his friend’s wife is killed, Hauer grabs the son and heads to Reno to find his friend and hand the bad guys some justice. Think of it as Marvel’s Daredevil, but in the 1980s. We here at The Nerds Templar have always enjoyed Hauer’s work and I hadn’t seen this film in forever. There is some great action and Shô Kosugi shows up to fight Hauer!  It’s a fun movie if you grew up on 80s action flicks and that slipcover is sweet! 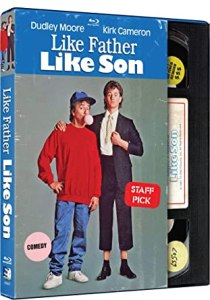 Sticking with the 80s, was there anything more 80s than a body swap movie? The Kirk Cameron/Dudley Moore starring Like Father Like Son also gets the Retro-VHS Edition treatment this week. Like The Parent Trap, Vice Versa and others, this sees Cameron as a high school kid with Moore as his doctor father. Moore wants his son to go to med school and Cameron is a slacker. After they accidentally take a potion that Sean Astin puts in a hot sauce bottle, they switch bodies and soon realize their lives aren’t exactly what they appear to be. Sure the movie is super dated by this point, but it’s a fun throwback watch. It came out in 1987 with Cameron being a pretty big star from Growing Pains and just look at that slipcover. 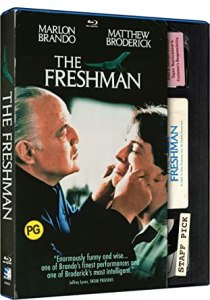 The Freshman from 1990 and starring Marlon Brando and Matthew Broderick is next. Broderick plays an incoming college freshman who gets robbed as soon as he steps foot in New York City. He gets involved with Brando’s gangster character and next thing he knows he’s picking up a Komodo dragon and delivering it to New Jersey. As he learns who he’s dealing with and what’s happening to endangered animals, he decides to quit, but Brando asks him for one more job. At this point Brando could do a character like this in his sleep, but he brings a campy freshness to it. I’ve always enjoyed these everyman, normal teen characters from Broderick (despite being late 20s when making it). I hadn’t seen it in well over 20 years and had forgotten most of it so it was fun seeing it again.

Last we have Crossroads from 1986. Ralph Macchio plays a guitar prodigy at Juilliard who isn’t interested in classical guitar after falling in love with the blues. He learns a blues legend is living in an old person home and after hounding him to teach him the blues, the two go on a road trip to the south where the Long Island boy can truly learn what makes the blues the blues. I had never even heard of this movie before watching it. I liked that it’s based on Robert Johnson’s deal at the crossroads and opens with that story. As someone who watched Supernatural for years, I’m well aware of crossroads demons and deals made in return for their souls. It was a pretty good watch with some great music especially the duel at the end with Macchio and guitar god Steve Vai.