We Will Schlock You is a series at The Nerds Templar where we take a look at bad B-Movies, So-Bad-They’re-Good, Over-the-Top Ridiculous, most likely to involve sharks schlock. Movies that are so bad you can’t help but enjoy them. 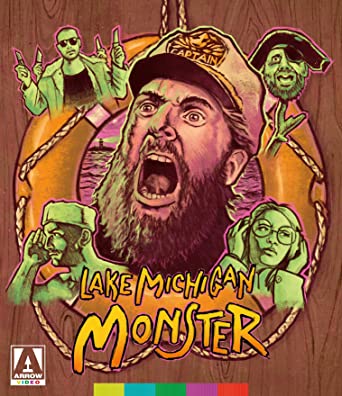 With a name like Lake Michigan Monster you expect some SyFy level monster movie, but this is even better than that. This is over-the-top ridiculous camp in black & white with hysterical dialogue and people 100% committed to their characters.

The first half of the movie is one style, with the eccentric Captain Seafield putting together a crew to capture and kill the Lake Michigan Monster who is responsible for the death of his father. There’s weapons expert Sean Shaughnessy, sonar whiz Nedge Pepsi, and former N.A.V.Y. – Nautical Athletes and Adventure Yunit – officer Dick Flynn. This crew is on a shoreline with laughable special effects trying to kill the monster which is pretty much just two large creature arms. They all have roles to play with one of them having an egg child with the monster. I sat stunned at what I was watching.

Then there’s a twist and the truth about Seafield comes out and he’s on his own to get the creature. It leaves the beach area as Seafield takes a ferry to an island to get his revenge with the help of ghosts. Here it becomes a CGI green-screen extravaganza and is just as ridiculous. The bonus features has a segment showing how this was shot and I highly recommend watching it. Seeing the actors “perform” in front of the green screen and how different props were used was just as entertaining as the movie.

Clearly a movie like Lake Michigan Monster isn’t for everyone, but I’d be lying if I said I didn’t have a ton of fun with it. I’m definitely recommending it to those who love schlocky movies. If you want a guy with a beard talking like he’s straight out of a Hemingway novel while also being the illegitimate son of Captain Nemo, then this is for you. If you like old school MST3K movies mixed with SyFy creature features, then this is for you. I had a blast with it.