Estranged Swedish identical twins Siri and Helena (Josefin Asplund) have always had a complex relationship. When Helena receives an invitation to visit Siri at an exclusive residential sanatorium in the breathtaking and picturesque Alps, she is reluctant but figures it will be a nice break from her monotonous life. Despite the peacefulness of the clinic, Helena refuses Siri’s plea for help in taking care of some business and swapping places for a few days but ends up waking up to find Siri gone. Soon she realizes that Siri isn’t coming back, and that the clinic is far from a place of recovery; it’s a facility for studying psychopaths. Helena is now trapped in a waking nightmare in which no one is who they seem to be, and everyone believes that she is Siri. Surrounded by the most predatory and manipulative people imaginable, including the director of the Sanctuary, Dr. Marvin Fisher (Matthew Modine), escape is now only the second order of business: Helena’s first problem is simple survival. 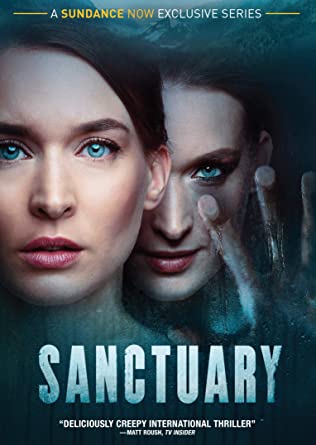 Sanctuary: Season 1 is an interesting watch, but it’s also super frustrating. The first episode is pretty straight forward. Here is the main character, Helena, working a job she doesn’t love, getting contacted by her estranged twin sister Siri. She decides to go to Siri’s retreat to see what her sister wants. Siri tells her about a girlfriend who was beaten by her husband and wants Helena to trade places with her for a day. They won’t let Siri out because it’s a mental/prison type treatment center with lots of rules. Hel (as she is called) says no, but stays the night. She wakes up to realize Siri is gone and she must pretend to be Siri until she returns. As she meets the doctors and those in charge everyone just assumes she’s the crazy sister Siri.

Then the show gets frustrating. The next few episodes are tough to watch because you know she’s not Siri, but of course, who’s going to believe someone claiming to be someone else in mental asylum? No matter what she offers up as proof, it’s somehow debunked or covered up. Episodes 2-6ish are really tiring as the viewer. You secretly hope it ends up that she is Siri pretending to be the sane Hel, but you know that shoe won’t drop.

But the show is saved by the final few episodes. You learn there’s a lot more to it and others are involved. Some people aren’t who they claim to be. The other patients all have something to them so you at least try to guess what’s going on with them. The show ends on a cliffhanger so I’m curious to see where Season 2 goes.

The lead actress Josefin Asplund is good in the role. It also features a pretty international cast including Matthew Modine, Will Mellor (No Offence), Richard Brake (Rob Zombie films), and Lorenzo Richelmy (Marco Polo). If the middle episodes weren’t so annoying I would have liked Sanctuary: Season 1 more. It’s good and I look forward to Season 2, but man was it rough to binge through.