ONLY ONE WILL RISE! The infamous firebird of cosmic destruction and rebirth known as the Phoenix Force returns to Earth in the pages of Jason Aaron’s AVENGERS this December. On the hunt for its next host, the Avengers and some of the most powerful heroes and villains in the Marvel Universe will engage in a globe-spanning competition that will ultimately decide…who will be the all-new Phoenix. 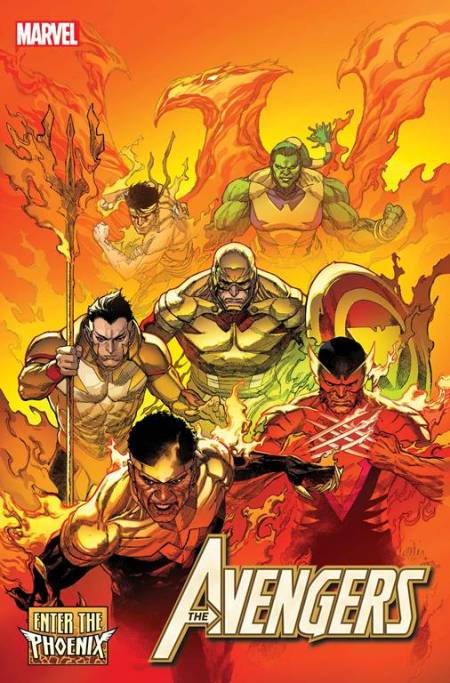 “The most iconic, primordial powers of the Marvel Universe have been central to my AVENGERS run. And few forces in the cosmos are more world-shaking and potentially world-destroying than the Phoenix Force. It’s legacy on Earth goes back to the Stone Age, as we’ve seen, but we haven’t seen much of the firebird in the present day. That’s about to change in a very big way,” Jason Aaron promises. “The Phoenix is back and in its spirit of fiery rebirth, it’s seeking a brand new avatar. So begins the greatest tournament the world has ever seen, as some of Marvel’s most powerful heroes and villains are called to battle for the right to become the all-new Phoenix. All will be transformed. But who will burn?”

As is tradition, the Phoenix Force graces its hosts with iconic new costumes. This time around, the cosmic designs come courtesy of superstar artist, Javier Garrón.

“Javier Garrón has been doing simply gorgeous work on the “Age of Khonshu,” and now he’s busy bringing to life the biggest, most powerful, more fiery group of Avengers we’ve ever seen,” Aaron said about his extraordinary collaborator. “Plus a few really wild surprises.”

Check out Leinil Yu’s cover of AVENGERS #40 and don’t miss ENTER THE PHOENIX when it kicks off in AVENGERS #40 this December!